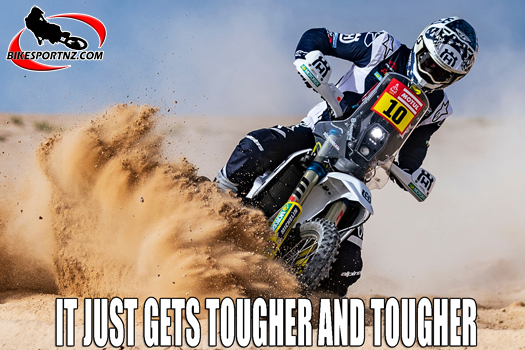 What a week it’s been at the 2023 Dakar Rally, with yet another different race leader emerging every day or so.

With Husqvarna’s Skyler Howes (United States, pictured here) leading the way overall after eight stages and his team-mate Luciano Benavides (Argentina) picking up his first ever stage win, it has been an incredibly positive start for the team at this 45th edition of the prestigious event.

Unexpected rain showers and floods forced organisers to cancel stage 7, so it was stage 8 that ran on Sunday (Monday NZ time).

Even after having skipped a racing stage, the bike categories at the 2023 Dakar rally still clocked 476km.

Benavides led team-mate Howes away at shortly after 5am to arrive at the 345km stage start for dawn, at around 7am. The stage consisted of a real mixture including sand and big dunes but also some tricky “twisty gravel tracks” with lots of slippery stone sections the riders reported.

That meant it wasn’t a good day to lead because those stones and tracks laid down were more helpful than usual, allowing riders keep on the gas where the front runners had to roll off.

Though they would claim bonus points for leading, ultimately Benavides, Howes and Australian Toby Price (KTM) lost way more than they gained and ended up dropping around 15 minutes.

The only consolation was the closer the following riders got to the front, the more they suffered and in the gaps which had been bigger, shrank again.

But there are a further six stages before they all reach the finish line in Dammam on January 15 and anything can probably still happen.

Rider standings after 8 of 14 stages: