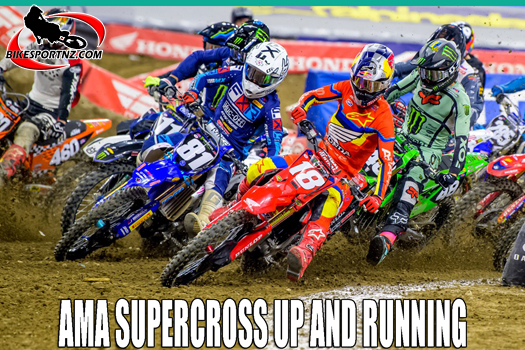 Colorado’s Eli Tomac and Australian Jett Lawrence rode to victory at the opening round of the 2023 Monster Energy AMA Supercross season at the weekend.

This is an event that also paid out points as the opening round of the inaugural SuperMotocross World Championship series and, unbelievably, it was defending champion Tomac’s first overall win at Anaheim 1.

After a tough battle through the pack in the 450SX Class, Cooper Webb locked down second place inside a packed Angel Stadium of Anaheim in Southern California.

After leading several laps late in the race, Chase Sexton took the third spot on the podium in this historical 50th year of Supercross racing. In the Western Regional 250SX Class, Lawrence nabbed the opening win with a wire-to-wire win.

Colt Nichols grabbed the holeshot of the 450SX Class Main Event, but Justin Barcia took over the top spot just two corners into the race.

Tomac and Germany’s Ken Roczen were right behind, battling hard and flying side-by-side down three consecutive rhythm sections. Tomac broke free of Roczen, then took the lead over the bridge jump three and a half minutes into the 20-minute plus one lap race.

Malcolm Stewart closed up to Roczen’s rear tire as Barcia got sideways in a rhythm lane and crashed off the track. Barcia’s crash moved Roczen to second, Stewart to third, and Sexton up to fourth.

Six and a half minutes in, Stewart drew alongside Roczen and battled his way past. The two riders nearly came together, forcing a mistake from Roczen that allowed Sexton to take over third place. Further back, Jason Anderson and Webb scrapped for fifth position.

Then Tomac crashed on the bridge jump he’d used to take the lead.

Stewart found himself out front. The crowd erupted as the Husqvarna rider saw his best shot at his first 450SX Class victory.

At the halfway point Stewart led, Sexton pursued in second place, and Roczen sat third. Sexton challenged for the lead as Tomac started his charge back to the front.

With just under seven minutes left on the race clock, Sexton pushed past Stewart, forcing Stewart momentarily off the track. Shortly after, Tomac reached third place and set his sights on Stewart in second.

As the clock ticked down past 3:30, Tomac pushed past Stewart while Webb got around Roczen and into fourth. One small bobble from Sexton put Tomac suddenly in a perfect position to take back the lead. Only 1.7 seconds separated the top three racers when Stewart went over the bars in a rhythm section and saw his shot at a first win disappear.

With two minutes to go, Tomac took back the front spot. As the clock ticked past one minute, Webb reached third position. Webb nabbed one more spot, taking second from Sexton just as they crossed the white flag.

Tomac took the checkers a lap later, earning his first Anaheim 1 victory and starting his title defence with a win and a display of speed that separates him as the rider to beat this season.

Emerging from the first turn with the lead, Jett Lawrence fought off early attacks from Cameron McAdoo. Before the first lap was in the books Lawrence had pulled clear of McAdoo and the pack and was never challenged again for the spot.

Behind Lawrence, McAdoo pursued with Max Vohland, Phil Nicoletti and RJ Hampshire close behind. Hampshire put down fast laps on the rutty track and moved into third place two and a half minutes into the 15-minute plus one lap race.

With under two minutes left on the race clock Hampshire made the pass into second position and held the spot to the checkers.

The racers battle again on Saturday night, January 14 at RingCentral Coliseum in Oakland, California for round two of the Monster Energy Supercross season.