Indeed, three of the scheduled six rounds of this AON Insurance and Pirelli-sponsored series have been completed and riders will arrive for round four at Teretonga Park Raceway this coming weekend (January 14-15) determined to push even harder for valuable competition points.

And, because round one of the series at Taupo in early December was abandoned due to dangerous track conditions, there are actually still more races yet to be contested than have already been raced, if you can appreciate the mathematics of that.

With fewer total races in the series than had originally been planned, it intensifies and concentrates the action, perhaps applying extra pressure to title hopefuls.

But it’s important to remember that there are three races in the programme for each of the various bike classes at this southernmost motorcycle race event on the planet and this will offer ample opportunity for competitors to enhance their standings and/or reputations. 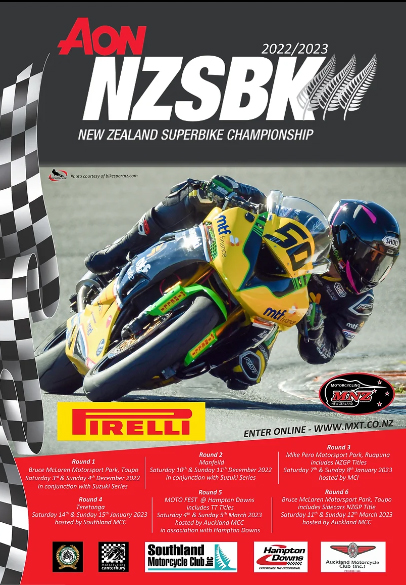 However, each of these races also provide the ever-present risk of haemorrhaging points with a silly mistake, an unlucky crash or a mechanical or electrical glitch, so that’s sure to keep everybody sharp.

There were plenty of examples of these risk factors playing a part at last weekend’s round three at Christchurch’s Mike Pero Motorsport Park (Ruapuna) and so nothing will be taken for granted by riders at Teretonga this Saturday and Sunday.

Whakatane’s Mitch Rees (Honda) has a solid lead in the premier 1000cc superbike class, a whopping 45 points ahead of his nearest challenger, Christchurch’s Alastair Hoogenboezem (Yamaha), and that’s despite both these riders having suffered mechanical misfortune.

Christchurch’s Dale Finch (Kawasaki) and Taupiri’s Zak Fuller (BMW) could also be considered superbike title contenders, having finished first and second respectively in their first race at Ruapuna last Saturday, but that also ended up being their sole point-scoring outings for the weekend after they both crashed out of the rest of that weekend’s racing.

The racing will take a month-long break after this weekend, set to resume with round five at the Hampton Downs-promoted Star Insure MotoFest extravaganza on the weekend of March 4-5.

The sixth and final round is set for a return to a resurfaced track at the Taupo International Motorsport Park and Events Centre on March 11-12.