In wrapping up his 2022 season with a national title win in the New Zealand Extreme Off-Road Championship series, he became a record winner in that pursuit. He was already a record title winner in the unique discipline of trial riding, so that makes him a rare individual indeed, a record national champion in two very different bike codes.

The 31-year-old father-of-two from Wainuiomata was virtually unbeatable this season as he claimed a record third outright win in the diabolically difficult New Zealand Extreme Off-Road Championship series at the weekend.

With four wins from four starts in the elite Gold Grade this season, Whitaker was again clearly the best individual in the competition and, in fact, he was so good that he had actually wrapped up the national title for 2022 with a round to spare.

But, even with the main silverware already locked away in his bulging trophy cabinet after winning the first three rounds of this 2022 series, Whitaker (KTM 300 EXC) was still taking no prisoners at the fourth and final round in the Akatarawa Forest, near Porirua, on Sunday.

He said he had “built a pretty big lead” by the time the chequered flag came out after more the five hours of unbearable graft and slog at the Moonshine Valley venue, quite an understatement when you consider he actually finished Sunday’s race a massive 49 minutes ahead of the eventual runner-up rider, New Plymouth’s Tony Parker (Husqvarna TE300).

In the end, only these two leading riders, Whitaker and Parker, were able to complete three laps of the demanding slippery and technically challenging circuit on Sunday, with the third-placed rider, South Islander Luke Corson (Beta RR300), from Whitecliffs, finishing one lap behind this leading pair.

“It was terrain I am familiar with and comfortable on,” said Whitaker.

“This was possibly the wettest race I’ve ever competed in. It was pretty tricky riding it and the event organisers cancelled one of the river sections after a few bikes got drowned.

“I think they took that out because it really could have ruined the day for quite a few people. 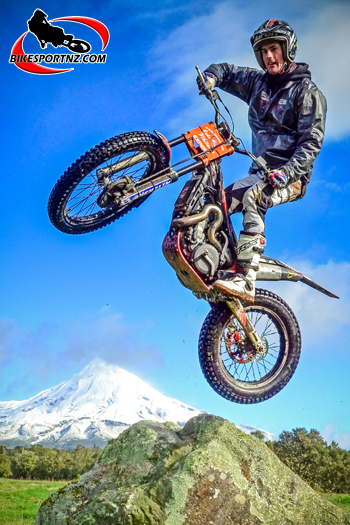 Wainuiomata’s Jake Whitaker, competing at a major trial event in Taranaki back in 2013. He won the trial nationals in the premier Expert Grade in Te Puke later that same year. Photo by Andy McGechan, BikesportNZ.com

“Tony (Parker) caught me up at one stage, but I then managed to extend my lead again after that. We had big rock slabs to ride up and it was like riding on ice. My bike was set up perfectly and I had some great tyres.

“Most of the riders only managed a few laps before the four-hour cut-off time, so their day was over early and it was only me and Tony still on the course for that final lap.”

Whitaker won this series overall in 2019 and again last year and his credentials as a record eight-time former New Zealand trial champion – a parallel but very different motorcycling code where the emphasis is on balance and throttle control rather than pure speed – meant he was always likely to be considered favourite to win again this season.

As a record winner of the New Zealand Extreme Off-Road Championships as well, which he has now won three times, more that anyone else since it was first created in 2018, Whitaker will no doubt be tipped as title favourite at the start of next season too.

It was a similar story with the Silver Grade, where Auckland’s Ryan Hayward (KTM 250 EXC) had already claimed the top prize with a round to spare, and he also won the day in the Silver Grade on Sunday to further cement his position on top.