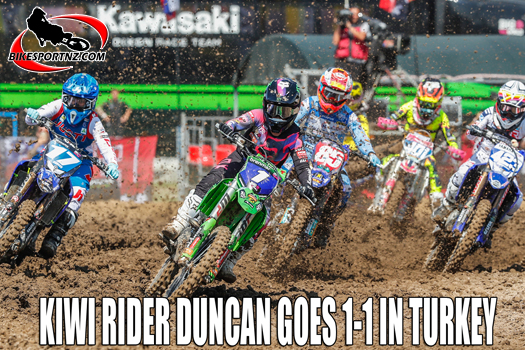 The fifth and final round in the 2022 Women’s Motocross World Championships (WMX) in Turkey at the weekend belonged to New Zealand’s defending world champion Courtney Duncan.

Otago’s Duncan and her Big Van World MTX Kawasaki Racing Team rounded out the season with a two-moto victory in the final round of the 2022 FIM World WMX Women’s Motocross Championship at Afyonkarahisar in Turkey.

The Kiwi rider, who was more than a second per lap faster than any of her rivals in practice, confirmed her domination and that of her KX250F bike with another clear holeshot in the second race of the weekend.

She was then content to maintain a slender lead through the early laps on a tricky slick surface after the organisers had done an excellent job of track-watering to combat any threat of dust in the warm conditions.

As the track dried out, Duncan moved further and further clear to eventually complete a perfect maximum 1-1 score with a winning margin of 4.5 seconds at the finish.

The double-win gave Duncan her second GP victory in the three rounds she was able to contest this year after a collarbone injury during practice for the second round of the series in Portugal had cost her a realistic shot at a fourth consecutive title since joining the Big Van World MTX Kawasaki team in 2019; the victory in Turkey was her 12th GP win from 19 starts during that period.

In terms of the WMX Championship standings, lost points because of the incident in Portugal meant Duncan was forced to settle for an unaccustomed world ranking of No.7 for 2022.

Meanwhile, the fight for the silver and bronze medals was very close, but, in the end, Dutch rider Lynn Valk (Yamaha) secured second, while Germany’s Larissa Papenmeier (Yamaha) took third overall for 2022.

Duncan actually won more motos (three of the 10) than eventual champion Van De Ven did this season, but her two zero-scores from rounds two and three (Portugal and Sardinia) were impossible for the Kiwi to claw her way back from.

“It was nice to finish the season on a high with pole and 1-1. I got another good start and led already coming out of turn one today; I just maintained that and had fun,” said Duncan afterwards.

“The broken collarbone in Portugal kind of dampened the season, but we couldn’t dwell on it. I got back to work as soon as possible and came back with some strong performances to win in Spain and here (in Turkey).

“I’m enjoying my riding so much at the moment so I’m looking forward to going home to New Zealand and doing some races out there, then I come back to Europe next year and hopefully can chase the championship again and get that No.1 back for Kawasaki.”

Round 5: September 3-4, MXGP of Turkey, Afyonkarahisar.