The three riders to represent New Zealand at the 2022 MXoN flew out to the United States this week, keen to get settled in before the rigors of racing demand their full attention, starting with set-up day at the track on Friday, followed by two days of racing, this coming Saturday and Sunday (September 24-25).

This year’s 75th edition of the great race, scheduled for the RedBud track in Michigan, is a call back to arms for the Kiwis, after two seasons of inaction.

New Zealand last sent a team in 2019, when the event was on that occasion staged in The Netherlands, and they finished 19th out of the 34 nations entered after two of the trio – Dylan Walsh and Wyatt Chase – became injured.

The MXoN did not proceed in 2020 due to the COVID-19 pandemic and New Zealand did not send a team to the MXoN in Italy last year because of safety concerns and continuing travel difficulties associated with the pandemic.

It is a new-look squad that headed to the US this week.

Tauranga’s Brodie Connolly will be New Zealand’s MX2 (250cc) class rider this year and it will be his MXoN debut, the teenager joined by two riders who do have previous MXoN racing experience, Waipukurau’s Rhys Carter (Open class) and Tauranga’s Josiah Natzke (MXGP class).

But, from rookie first-timers in 1984 to top-10 regulars just over 10 years later, Kiwi motocross riders have always boxed well above their weight and have often been rated among some of the best in the world.

Team New Zealand has finished among the top 10 an incredible 14 times in 30 appearances at the event since they first attended in 1984 – not bad for a country with an entire population less than that of many cities in the nations of some of their MXoN rivals.

New Zealand has been on the MXoN podium on three memorable occasions over the years – third overall at Foxhills, in England, in 1998 (with Darryll King, Shayne King and Josh Coppins waving the silver fern flag); third again at Namur, in Belgium, in 2001 (Daryl Hurley, Josh Coppins, Shayne King) and third too at Matterley Basin, in England, in 2006 (Josh Coppins, Cody Cooper, Ben Townley – in photo above).

The Kiwis have also finished among the top-five on three other occasions – fifth in Austria in 1993, fourth in Belgium in 2003 and fourth in France in 2005.

But the past few years have been lean times for the Kiwis. 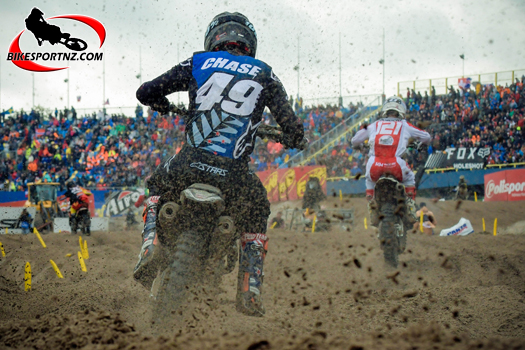 Taupo’s Wyatt Chase did his country proud in the sandy slop at the Motocross of Nations in the Netherlands in 2019 and New Zealand colours will again fly at the 2022 edition of the MXoN this coming weekend in Michigan, in the United States. Photo by Andy McGechan, BikesportNZ.com

With the COVID-19 pandemic forcing an unwelcome two-year hiatus, the Kiwis are eager to get back to this famous country-versus-country, teams’ racing competition.

The Kiwi campaigners for 2022 – Natzke, Connolly and Carter – will proudly wear their distinctive black and white silver fern apparel at the RedBud circuit, in Michigan, the same venue that hosted the 2018 edition and where New Zealand managed to finish 17th (elevated from 18th after Team Italy was disqualified for fuel violations).

Among the 34 different nations entered this year, some of the favourites to win include the likes of Team USA with their riders Eli Tomac, Justin Cooper and Chase Sexton, a typically-fancied team that will aim to break an 11-year drought and get back on top, while Team Italy’s Antonio Cairoli, Andrea Adamo and Mattia Guadagnini will be aiming to make it two wins in a row after they took the top prize when it was staged on their home turf last season.

The French, who won this event five years in a row from 2014 to 2018, is again looking strong this year, with Maxime Renaux, Marvin Musquin and Dylan Ferrandis set to wear their traditional red, white and blue tricolour, as is the orange-outfitted Dutch team, comprising Glenn Coldenhoff, Kay de Wolf and Calvin Vlaanderen.

Team Australia’s Mitch Evans, Hunter Lawrence and Jett Lawrence could be expected to fight for the top positions this year too.

“Special thanks to both Shayne King and Bevan Weal, our team managers. They have done a great job in having everything sorted out for when the team lands.

“The boys are fired up and ready to race,” he said.

“We hope they can get into the (20-nation) finals races and maybe even get on the podium again. I look forward to seeing what results they can achieve,” he said.