Grand Prix stars Glenn Coldenhoff, Kay De Wolf and Calvin Vlaanderen will be behind the starting gate for Team Netherlands for the Monster Energy FIM Motocross of Nations (MXoN) in the United States.

This year’s MXoN will be hosted on the RedBud MX track in the US state of Michigan, the same track that hosted the Monster Energy FIM MXoN in 2018.

Coldenhoff in particular has fond memories of that race, as he won both his races there in 2018, a feat he repeated in 2019 in Assen, where the Dutch team – including Vlaanderen – became the winners in front of their home fans.

Coldenhoff is enthusiastic about his participation: “Competing for the Netherlands is always something special and that I can do this for the tenth time is great!”

Vlaanderen also agrees: “I have no doubt that the Nations will bring out the best in me.”

Kay De Wolf, debuting in the Motocross of Nations, adds: “I am happy and grateful that I can make my debut in Team NL.”

Barry Forschelen, team manager of the Team Netherlands, about his selection: “The well-known luxury of great Dutch motocross riders – with a full Dutch podium during the MXGP in Lommel (in Belgium) as the highlight of this year – immediately imposes a heavy task for me, in my first year as team manager for Team NL. Glenn and Calvin were chosen as they have the most experience with the team.

“They both know the circuit in RedBud and they were also part of the historic MXoN victory for the Netherlands in 2019. For the young, talented Kay De Wolf, this is the ideal opportunity to make his debut during the MXoN.”

The Monster Energy FIM Motocross of Nations will take place on Saturday, September 24 and Sunday, September 25, at RedBud MX in Buchanan, Michigan, in the United States.

The Kiwi contingent for this year’s MXoN was announced earlier and that will be West Auckland’s Hamish Harwood, Tauranga’s Brodie Connolly making his MXoN debut (MX2) and Tauranga’s Josiah Natzke (Open Class).

The reserve rider for New Zealand will be Waipukurau’s Rhys Carter.

The last time New Zealand was represented at this “Olympic Games of Motocross” was at Assen, in the Netherlands in 2019 and the Kiwi team that year (Wyatt Chase, Dylan Walsh, Maximus Purvis) finished 19th overall. 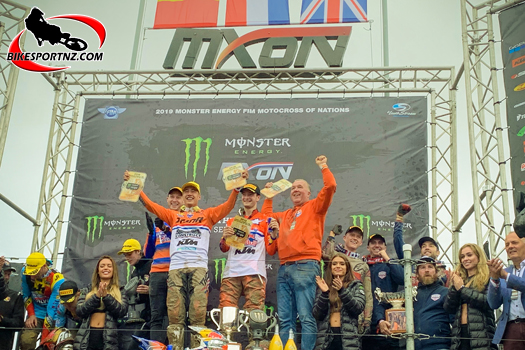 The podium at the Motocross of Nations at Assen in 2019, when Team Netherlands (comprising riders Jeffery Herlings, Calvin Vlaanderen and Glenn Coldenhoff) won the prestigious event for the first and only time. Photo by Andy McGechan, BikesportNZ.com