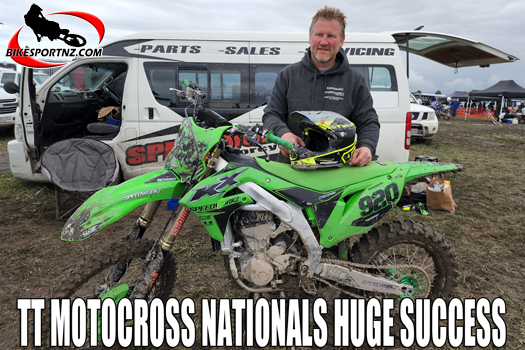 Timaru’s Andrew Richardt kept the pressure on at the motorcycle community’s annual New Zealand Motocross TT Nationals and it reaped a rich reward for the 44-year-old businessman.

Throttles were twisted to the stops on the mostly-flat grassland course near Timaru at the weekend and riding skill, bravery, bike reliability and a perhaps a small element of luck were the key ingredients in eventually determining the title winners.

This year’s Fabtech-sponsored New Zealand Motocross TT Championships on Saturday and Sunday had it all, with riders from all corners of the country arriving to battle the elements and one another over the two days.

The entry list included the stars of motocross, cross-country, enduro and even a few road-racing heroes, but it was Kawasaki rider Richardt (pictured above) who took the main prize, winning the coveted MX1 class title for 2022.

Richardt actually won only one race all weekend, but he was consistently fast and reliably strong.

He took his distinctive green Kawasaki KX450F to finish 4th, 4th, 2nd, 1st and 2nd over his five MX1 class races at the weekend, but that was enough for him to take the title for 2022.

He wasn’t the fastest rider at the event – that honour actually going to MX2 (250cc) class rider Jack Symon, from Invercargill – and Richardt didn’t have the most wins in the MX1 class either, with fellow Timaru man Josh May winning four of the five MX1 races, but Richardt was champion in the consistency stakes and in the overall analysis.

When May ran out of fuel in the fourth of five of his MX1 class races at the weekend (and he therefore scored zero points), his title bid was suddenly in tatters.

“I originally wasn’t even going to ride this event,” he said.

“I had an injured ankle and the racing attitude wasn’t really there, but I turned up hoping just to have some fun.

“Granted, I had a bit of luck go my way. Justin Macdonald (of Christchurch) is almost unbeatable at TT racing, but he crashed early on and was injured. Josh May was awesome too, but he ran out of fuel in one race. Then, in the last race, I knew I had to beat one of my best mates, Michael Dunn, but he had a couple of crashes and I eventually took the title by one point.”

With racing for 10 separate championship classes over the two days, as well as support and mini classes being run, the term “flat track” may have been a little misleading, with the circuit getting increasingly rougher and rutted as the weekend progressed and rider fitness eventually played as much a part in the outcomes as any riders’ bravery, skill or horsepower advantage.

“It was a pleasure to attend the first TT nationals in the South Island,” he said.

“It was an amazing club of volunteers who put together and ran a fantastic event, which was well supported by riders of all ages. I look forward to more big events in the South Island to come in the next few years.”