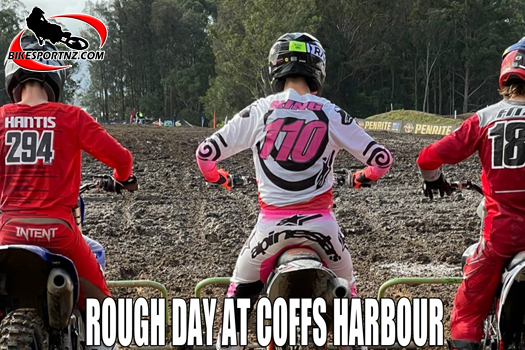 It was a mixed bag of results for Kiwi brothers Curtis and Rian King at the sixth round of eight in the Australian ProMX Championships at Coffs Harbour, in New South Wales, at the weekend.

The Alpinestars-backed Taranaki siblings battled well with the Australian elite on Saturday and Sunday and are now looking forward to also contesting the final two rounds of the series in the coming weeks.

The eldest of the two Kings, 19-year-old Curtis, said the “track was amazing and super technical”.

“The ruts were deep track was super rough and tough,” he said, after claiming 30th and 25th in his two MX2 class races.

“I struggled a bit in both motos with endurance because of sickness. I’ll go home and rest up and come back stronger for the next two rounds.

“I’m feeling confident for the last two rounds, heading in with the preparation I’ve had up to now and carrying that on into the next rounds.”

His 16-year-old brother Rian (pictured here on the start line at Coffs Harbour) was equally upbeat as he too looks ahead to the following two events.

“The track was rough, but it was good fun racing over there. I finished 15th in moto one and 14th in moto two, good enough for 13th overall in the MX3 class.”

Meanwhile, at the top of the categories, it was Dean Ferris and Wilson Todd who dominated proceedings.

This official “Retro Round” 6 of the 2022 Penrite ProMX Championships did not disappoint, as a technical and challenging Coffs Harbour race track gave riders and fans epic battles and on-track action all day long.

With mid-week rain clearing to a beautiful day, riders had to navigate a rutted race track that kept them on their toes. It was a battle of consistency and intensity across all the championship classes.

The opening MX1 moto showcased the battle many have been anticipating with a trademark holeshot from HRC Honda Racing Australia star Ferris.

Champion leader red plate holder Aaron Tanti, on the CDR Yamaha Monster Energy Yamaha, was close in 2nd place from lap one. From there it was go time, as the duo banged bars around the technical but fast Coffs Harbour track.

Behind the lead duo, Matt Moss on the BBR Yamaha 102 Motorsports  crashed on lap one in 5th position and be clipped by another rider, ending the moto for the fastest qualifier from the pole shootout.

At the 5-minute mark, Tanti pulled the trigger on passing Ferris for the lead, as Brett Metcalfe on the GO 24 KTM passed Todd Waters on the Husqvarna Australia machine for 3rd position.

As the middle laps of the Moto ticked off, Ferris began to close back in on Tanti and with two laps to go, pulled the trigger on an aggressive pass to retake the lead.

From here, things began to unravel for Tanti, tipping over with one lap to go. As Tanti remounted, Metcalfe passed for 2nd position and then KTM Australia’s Kirk Gibbs mounted a monumental charge on the MX1 field, going from 7th position on lap one to pass Tanti and take 2nd on the final lap.

At the chequered flag it was Ferris with the win, from Gibbs, Metcalfe, Tanti and Waters.

A frantic first lap ensued in race two of MX1 with Ferris taking the holeshot, followed again by Tanti in 2nd.

Ferris and Tanti battled early in lap one before a big mistake from Ferris in a technical turn gave Tanti the room he needed to make the pass stick.

Waters, Gibbs and Empire Kawasaki’s Jayden Rykers also battled furiously over 3rd position in the opening laps. With a rapidly deteriorating race track, both Tanti and Ferris took several laps to find lines and establish a race pace before the 2nd half of the race battle began.

Ferris began to inch up on Tanti and then pulled the trigger with 8 minutes to go with an aggressive inside line, cutting off Tanti’s run in the ruts to the next corner. Behind the leaders, Gibbs established 3rd position early and laid down consistent laps to solidify another moto podium finish.

GAS GAS Australia’s Hayden Mellross put on an inspired ride to charge through to 4th position late in the moto, battling with Waters.

As the laps wound down, the chequered flag flew for Ferris, going 1-1 on the day and taking the overall victory.

With Gibbs in 3rd position, he secured 2nd overall and Tanti’s 2nd place in the final moto gave him 3rd overall, allowing him to maintain his red plate position as he left Coffs Harbour.

Leading standings after round six of eight:

As the gate dropped for  MX2, riders were presented with a race track giving more lines, options and passing opportunities than when they were last on track for the first qualifying session.

Rhys Budd on the Yamalube Yamaha made his intentions clear to the field by taking the Holeshot and establishing strong track position early, with a several bike length lead at the conclusion of the first lap.

Kaleb Barham on the MPE Husqvarna took his momentum from Maitland into Coffs Harbour, running first in 2nd place and then 3rd for half the race before a small mistake saw him move out of the top 5 by the chequered flag.

Wilson Todd on the HRC Honda Racing Australia Crf250r took a few laps to figure out the track before once again putting on a clinic of speed and precision, passing Budd for the lead on lap 4 and never looking back.

Crawford was the first to fall from the top 3 and Barham quickly followed suit a lap later.

Malkiewicz also fell from contention in this same cluster of laps as the technical Coffs Harbour track claimed more victims.

As the racing settled down, it was Todd who cruised to victory, with Budd in 2nd, Yokoyama who took control of 3rd position, with Crawford rebounding to 4th from his fall on his first gate drop since returning from pre season injury.

Dobson rounded out the top five in 5th place.

Crawford was marked as one of the riders who would challenge Todd for the 2022 Championship prior to his injury prior to round one.

As the laps progressed, Dobson passed Rogers for 4th whilst the top 3 positions were solidified to the chequered flag with Todd taking his second victory of the day and the overall round win.

Crawford took 2nd in the moto, mounting a late race charge to Todd which saw him close in to a couple of bike lengths at the finish.

Cosford posted his first podium Moto finish of the season in 3rd, with Dobson and Rogers finishing 4th and 5th respectively.

With another overall victory, Todd marches closer and closer to clinching the 2022 MX2 championship crown.

Leading standings after round six of eight: