The admired event has again attracted most of the nation’s major riders, with Saturday’s action dedicated to raising funds to send a three-rider New Zealand squad to compete at the annual Motocross of Nations (MXoN), this year set to be held in the United States.

Sunday is reserved for the third round of six in the host Taupo Motorcycle Club’s popular Taupo Winter Series.

The ravages of the COVID-19 pandemic prevented the MXoN event from going ahead in 2020.

The MXoN, commonly referred to as the “Olympic Games of Motocross”, was resurrected in 2021, but it went ahead in Italy that year without Kiwi representation, and so, with those dollars kept in the bank, a financial foundation now exists to help cover the costs of sending a New Zealand team to the event this time around.

The MXoN is this year being staged at Red Bud, in Buchanan, Michigan, over the weekend of September 24-25.

The team-versus-team format used for Saturday’s racing in Taupo – which is similar to the nation-versus-nation configuration of the MXoN – is immensely popular with the New Zealand motocross community.

The Battle of the Teams will feature the mini riders, juniors and women, as well as seniors and veterans.

There will no doubt be some exciting match-ups, with draw-card riders such as Otago’s three-time women’s motocross world champion Courtney Duncan, Mount Maunganui’s Cody Cooper (pictured above, on bike No.69, in action in France in 2015), Oparau’s James Scott, Tauranga’s Brodie Connolly and Tauranga’s Rhys Carter, for example, all keen to make a few waves.

Cooper and Carter have both represented New Zealand at the MXoN in the past, as have several other riders who will also be competing or assisting in Taupo this weekend, individuals such as Hawera’s Daryl Hurley, New Plymouth’s Shayne King and Tauranga’s Ben Townley.

“It will be a huge release for many after COVID restrictions and we can’t thank our sponsors enough for still being there for us.

“With the likes of Courtney Duncan listed among the entries, it gives the event an extra boost and we see there are a lot of other women riders entered and, in fact, many riders from all categories, from mini riders through to veterans, also lending great support.

“Impressive entries have been received from far and wide, with many travelling up from the South Island, and that’s pleasing to see too,” he said.

“It shows just how strong is the backing from the motocross community for us to send a team to the Motocross of Nations in September.” 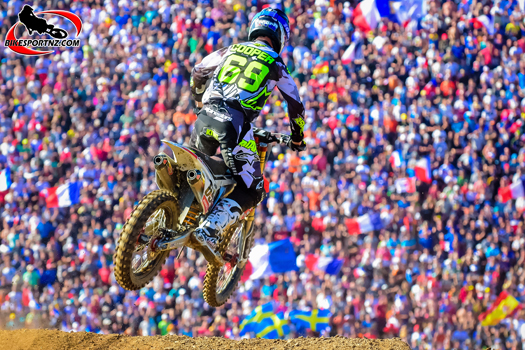 Bay of Plenty’s Cody Cooper is among the favourites this weekend. He is a multi-time national MX1 champion and multi-time Team New Zealand representative at the Motocross of Nations (pictured here racing at the MXoN in France in 2015. NZ finished 8th that year). Photo by Andy McGechan, BikesportNZ.com