Unfortunately, the COVID-19 pandemic has struck down the man who promotes, organises and manages the series – Tokoroa enduro and cross-country legend Sean Clarke – so, unfortunately, it can now not go ahead this weekend.

Although this series opener has been cancelled, rest assured that it will be all systems go for rounds two and three, as scheduled in July and August, and Clarke says it is highly likely that another date will be found to eventually run a third round too.

It’s not a new series, but rather a tried-and-true and extremely popular competition that has merely undergone a re-branding – it was formerly called the Dirt Guide Cross-country Series – so riders can expect to feel entirely at home on any of the forestry courses being laid out for them.

The Forestland Cross-country Series has a new main sponsor – Forbes and Davies, New Zealand’s leading importer and wholesaler of motorcycle tyres, ATV tyres, ride apparel, helmets and accessories – so entrants will still have plenty of opportunity to leave with a few goodies at the end of the weekend.

Forbes and Davies is the New Zealand distributor for key brands such as O’Neal, Arai and Ogio and these brands have had a long relationship with the series.

The popular series caters for cross-country riders aged from as young as seven, through teenagers, adult men and women and to the upper age brackets too, with veteran riders in their 60s, or even older, all keen to join in.

The series, originally formed by husband and wife partnership Sean and Adele Clarke back in 2008, has grown to become one of the biggest motorcycle cross-country events in New Zealand, with riders typically travelling from over all over the North Island to attend.

Members of the newly-formed Forestland Motorcycle Club promise a well-marked and safe course at each of the venues, something that “will be fun and a little bit challenging at the same time”.

Clarke said the forest trails provide something that appeals to all riders, from the elite national championship-winning stars of the sport, right down to the entry-level or novice riders.

The popularity of this competition, which features a 90-minute junior race followed soon afterwards by a two-hour senior race, includes separate trails and several different grades incorporated into the day’s racing, catering for all levels of confidence and ability.

This series is also an ideal opportunity for the lesser or beginner riders to learn from the masters and perhaps put into effect during the trail ride that is to be run at the same venue the following day. 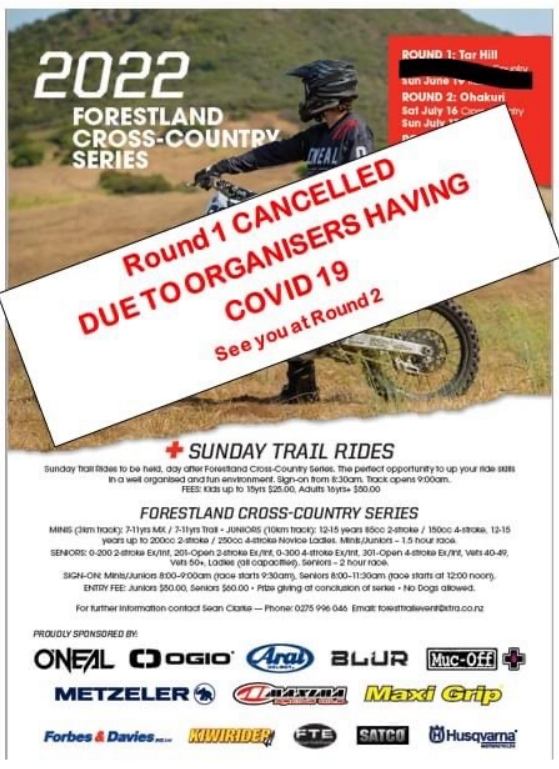