The 20-year-old Honda rider from Oparau, near Kawhia, wrapped up the 2022 senior crown at his first attempt with a round to spare and didn’t even need to show up for Sunday’s fourth and final round of the series near Porangahau, in Central Hawke’s Bay.

But the motocross and enduro star can now add national cross-country champion to his curriculum vitae as he prepares for a giant international motorcycling competition that is looming large on his horizon.

He is building strength and stamina as he works towards representing New Zealand at the “Olympic Games of dirt bike racing”, the annual International Six Days Enduro event, in southern France in late August and early September this year.

Interestingly, Yeoman and Watts will be racing alongside Scott, as team-mates rather than rivals, in France later this year – this trio forming the Junior Team for the New Zealand effort at the ISDE event, to be held near the town of Le Puy en Velay.

In addition to making it four outright wins in a row with his victory on Sunday, Scott also added the four-stroke over-300cc class cross-country title to his trophy haul this season. 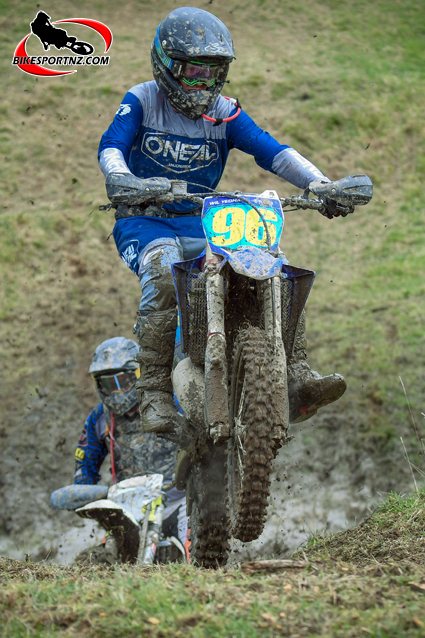 Taupo’s Wil Yeoman (Yamaha), runner-up to Honda’s James Scott at the fourth and final round of the nationals at Porangahau on Sunday. Photo by Andy McGechan, BikesportNZ.com

He underlined that performance by repeating it with two more wins, at back-to-back rounds two and three, near Masterton and Dannevirke respectively, in April and that was enough for him to seal the main title with a round to spare.

“I just was really keen to win all four (rounds of the series) and it’s good for my build-up to the ISDE too,” said Scott.

“I had a good weekend really. I got a good lead on lap one and just maintained that until the end.

“The chasing guys never really got close to me. It was a good winning margin at the end of the three hours.

“I did have a couple of crashes on Sunday and one of them was quite good. I just got on the gas a bit hard coming out of a corner and the bike spat me off, but there was no real damage done. The front wheel was bent, but I stopped and straightened it out on a fence post.”

The next assignment for Scott is to tackle the three-round 2022 New Zealand Enduro Championships, starting near Whanganui on Saturday, June 4.

In the battle for junior bike class titles, Cambridge’s Jared Hannon sealed up the series overall, as well as taking the four-stroke over-200cc title, while Parkes collected the two-stroke over-85cc title and Eketahuna’s Ollie Corbin won the under-85cc class.