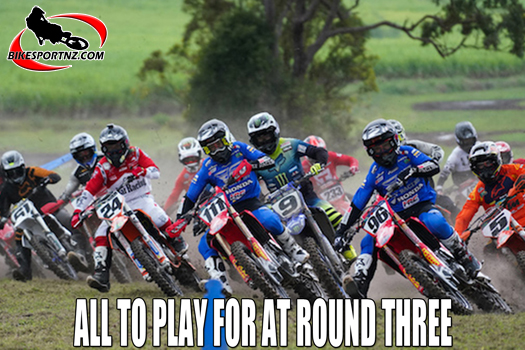 This weekend will see Wodgona host round three of the ProMX Australian Motocross Championships, with the series now thrown wide open in the premier class.

In the MX1 class, the title is completely up for grabs, after what can only be described as an unprecedented turn of events for the championship red plate holders since round one.

In spectacular fashion, the defending champion and leader’s red plate holder from round one, Luke Clout, riding for CDR Yamaha Monster Energy team, exited the series after a high-speed crash in the opening MX1 race at round two in Mackay.

Clout has confirmed successful surgery to repair a broken lower leg and is now on the road to recovery, but he will relinquish his #1 plate at the end of the championship.

In a devastating blow to his rookie season, winner of round two in Mackay and new red plate holder Kyle Webster, riding for the Honda Racing Australia team, was injured in a practice crash the week after round two, breaking both his left foot and right ankle, consequently ending his MX1 championship aspirations for 2022.

The scene is now set for Wodonga to be the undeniable momentum showdown of the MX1 challengers. CDR Yamaha Monster Energy’s Aaron Tanti, Husqvarna Australia’s Todd Waters, KTM Australia’s Kirk Gibbs, GO24’s Brett Metcalfe and Honda Racing Australia’s Dean Ferris, all have a huge point to prove at Wodonga by putting it all on the line to establish themselves as the new championship favourite.

With three-time former champion Ferris returning to form and winning the final moto at Mackay, you can bet he will be hungry for more, just as his competitors will be eager to stop him gaining any further momentum in the championship chase.

In the MX2 class, it has been the tale of elite level speed and consistency from Honda Racing Australia’s Wilson Todd.

Winning all four motos of the season so far with a perfect 100 points, Todd has shown incredible race craft to get the job done so far.

However, Todd has been consistently challenged by Yamalube Yamaha’s Alex Larwood, who has been gaining confidence and momentum early in the season.

The Serco Yamaha duo of Bailey Malkiewicz and Jesse Dobson will also probably feature heavily in proceedings at Wodonga, looking to make ground on Todd and Larwood during these early stages of the championship.

Husqvarna Australia’s Dylan Wills will bring his trademark good starts and flowing style to Wodonga where the NSW-based rider will no doubt show his speed and comfort early on the hard-pack terrain.