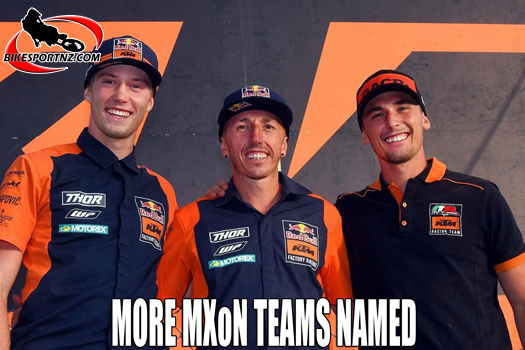 It’s time for redemption and the Italian team have set their goals for the Motocross of Nations, to once again confirm themselves as top nation and capture the famous Chamberlain Trophy.

Team Italia have only won the MXoN once, in Spain in 2002 – with Andrea Bartolini, Alessio Chiodi and Alex Puzar as their riders) – but they have always been among the favourites.

Team Italy was retrospectively disqualified in 2018 (three months later, in Jan 2019) from the MXoN after illegal fuel was discovered in the bike of one of their riders (Michele Cervellin). This dropped Italy from second overall to 30th and last in the classification that year.

Perhaps now it’s time for the Italians to make amends.

Everybody is waiting for the Motocross of Nations 2021. Due to the COVID-19 pandemic situation, the MXoN didn’t take place last year, but this season it will be run in Mantova, Italy, on September 26.

The Italian coach for 2021 is Thomas Traversini and their riders will be Antonio Cairoli, Mattia Guadagnini and Alessandro Lupino (pictured here).

Cairoli is a nine-time World Champion and he will be the captain of Team Italy.

Cairoli is still fighting for the MXGP title in the 2021 season with many consistent races with one GP win and many podiums. Guadagnini has already achieved important results with the Maglia Azzurra back in 2019 when he won the Junior World Championship and now is in the second position in the MX2 Championship.

Lupino is having a really good season with solid results and many finishes in the top 10, showing a good speed.

“Our team is really competitive for the MXoN,” said team manager Traversini. “Once again our riders showed how important they feel being part of the Italian Team and wear the Maglia Azzurra being available to represent Italy. Cairoli and Lupino are used to this competition and they are ready.

“Guadagnini is at his first time at the MXoN, but he has already competed at other International competitions with the national team. All the riders have really good relationship (with one another) and I’m sure the group will be super compact and focus on the main goal.”

Meanwhile, Team Great Britain has also been announced this week.

The MXGP spot will see Watson make his return to Team GB at the MXoN after previously contesting the event in 2018 in the MX2 class.

The 24-year-old from Nottingham is currently sitting inside the top 10 of the World MXGP Championships, with finishes including a fifth overall at the GP of Oss earlier in the season.

British MX2 Champion elect Mewse will be lining up to compete in the MX2 class.

Mewse has been in great form both at British and World Championship level and will be contesting the MXoN for the first time. Mewse is a strong sand rider and his performances at the GP Lommel proves that he has the pace to run at the front of the MX2 class.

This year Simpson will be lining up in the MX Open class. Simpson heads into the 2021 event as Team GB’s most experienced rider and will be looking to repeat his podium finish of 2019.

The team from the United States is the record-holder for FIM Motocross of Nations overall team victories, with 22 overall wins, but it will not be making an appearance at this year’s event.

Most of the USA wins took place under the guidance of Belgian five-time Motocross World Champion and AMA Motorcycle Hall of Famer Roger DeCoster, although the Americans haven’t won the event since it was staged at St Jean d’Angely, in France, in 2011.

There will be no teams at this year’s MXoN from New Zealand or Australia.