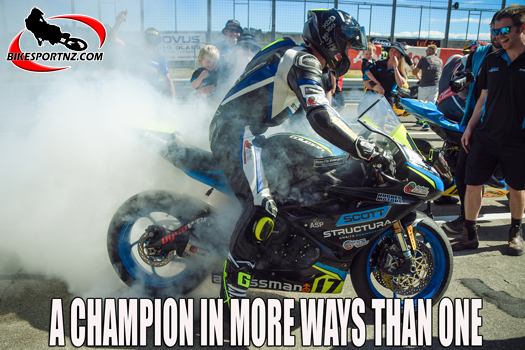 Christchurch’s Dale Finch became New Zealand Supersport 600 champion earlier this season and a more cheerful and popular road-racing winner you could not hope to meet.

He arrived at Taupo for the final round of the pandemic-shortened 2021 New Zealand Superbike Championships with a massive 32-point lead over Upper Hutt’s Rogan Chandler, but he still had to weather spirited assaults from Chandler, Taupiri’s 600cc class debutante Zak Fuller and Rangiora’s former 600cc champion Avalon Biddle before he could eventually claim the Supersport 600 title.

“This is my first title on a road-race bike. I’ve won national speedway titles in the past,” said the 30-year-old Finch and, with that statement, we suddenly learned something remarkable about the man … he’s a former champion in another bike code and not many people knew this because it’s a sport that perhaps only occasionally gets the media coverage it deserves.

“As a child, I spent the week looking forward to going out to Ruapuna speedway with my father. I always took interest in the senior solo (speedway) bikes that used to race on the infield track. 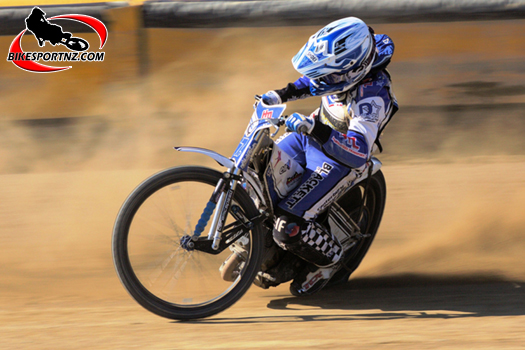 Christchurch’s Dale Finch, the New Zealand Supersport 600 road-racing champion for 2021, but also a former champion in the speedway world. Photo by Ken Fox.

“One night, when I was eight years old, I had gone into the pits on my own and organised for myself to have a ride on a junior bike at Moore Park speedway. I had always been on dirt bikes since I was four and had raced motocross in the 85cc class, but financially our family couldn’t afford it.

“So my dad took interest in speedway as it was just a Honda XR125cc motor and he could build the chassis himself, so it was cheap. I started to show potential and I began to move up through the ranks.

“As a kid I was privileged to be taught by speedway legend Ronnie Moore. You can only ride a senior 500cc solo at 16 years old but, on my behalf, Ronnie, wrote a letter to SNZ for a training dispensation. This allowed me to practice on the bigger bike.

“So when I entered my first national championship at age 16, I was well tuned and managed to come away second place behind Andrew Barge, who had been racing premier league in England and in front of now 10-time New Zealand champ Jason Bunyan, who also was a elite league professional rider in England.

“The same year I had a huge crash at Moore Park where the bike hit a rut coming out of the corner, sending me into the wooden fence. This broke my back in three places and a lot of internal damage. I spent a month on my back and had to go through rehab to walk again.

“This scared both me and my family. But with three years off the speedway bike, I decided lesson learned and it was time to give it another go.

“On my first year returning to the sport, I won the national under-21 championship. I also won it again the following year which qualified me into the a world under-21 qualifying round in Germany.

“With a lot of support from the speedway community and fund-raising from my mother, we made the trip to Europe.

“I scored four points in Germany and to qualify through to the next round I would of needed at least eight.

“For me, this was still a huge achievement, we were on the back foot from when we got there little to no track time on European tracks and, with it being winter in New Zealand, I hadn’t been riding at home before we left. 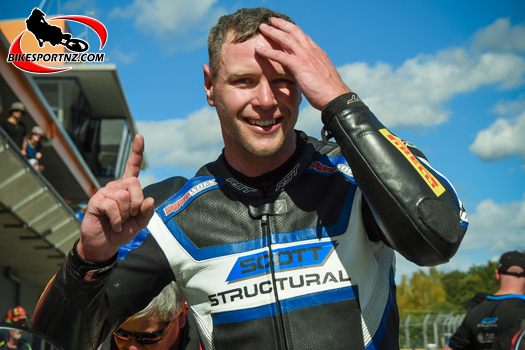 “With the years I had off the bike with my injuries at age 17, I had missed the boat with getting a national league ride in England. I couldn’t get my foot in the door because the rules had changed with needing a British passport.

“With the help of sponsors, Jason and Zoe Bunyan who was racing premier league at the time in England  I went back to try ride second half’s which where run after a league meeting to help show promoters what I could do hoping this could land me a professional ride.

“Unfortunately this didn’t come to anything. The six-point average needed for a Commonwealth rider was just too high for someone with no league racing experience.

“I came back to New Zealand and carried of with my speedway here. I never won a open class national championship but did come runner-up a few more times. The experience of Jason was just simply too high for me. We would only do 10 meetings a year compared to him riding a few times a week in England.

“Due to the drop off with speedway riders in New Zealand, I wanted to give something else a go.”

The story will continue tomorrow here on BikesportNZ.com, with Dale chatting about the life changes he made to find satisfaction and success in motorcycle racing of an entirely different kind.