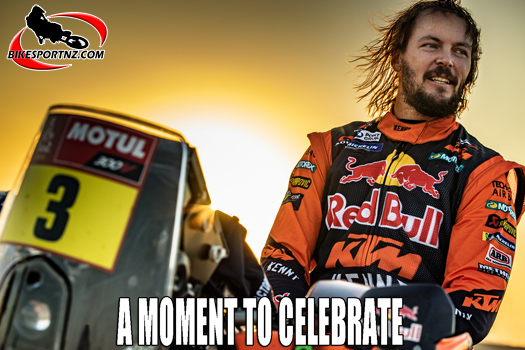 It was a moment that all motorcyclists should celebrate when Toby Price was honoured with a Medal of the Order of Australia for his outstanding contributions and achievements in sport while representing the nation.

There is no doubt Price is an icon of Australian and international motorsports and he continues to fly the flag proudly around the globe.

After his most recent brave efforts in the Dakar Rally in Saudi Arabia, on the bike and as bush mechanic, some are even claiming he may be the toughest Aussie athlete of the moment.

It seems only fitting then that Price’s achievements as an athlete were honoured last month.

Toby Price is one of Australia’s most prolific and respected motorsport racers. Beginning with off-road motorcycle racing, specifically endurance-based events, Toby excelled from the moment he got in the saddle, winning the 2010 Australian Off-Road Championship in his first year of competition.

In the same year he also won the Finke and Hattah Desert Race on his first attempt.

Since then, Price has gone from strength to strength, leading to his debut in the Dakar Rally in 2015 – a stellar performance earning him 3rd place overall. In the same year he earned a full-time spot on the KTM Factory Red Bull Rally team and claimed his 5th Australian Off-Road Championship.

2016 was another landmark year for Price, dominating the Dakar Rally and taking out 1st place with a lead of 40 minutes and becoming the first Australian to ever win the rally.

In the same year he also competed in both the Car and Bike categories of the Finke Desert Race, placing 2nd and 1st (for the 5th time) respectively.

It has so far been a phenomenal career, but one that hasn’t been without hardships – during the 2021 edition of the Dakar Rally, Toby crashed while in 2nd place, fracturing his collarbone and ending his race early.

The break marks a painfully historic moment in his career, being the 30th broken bone, which includes a femur and neck break as well.