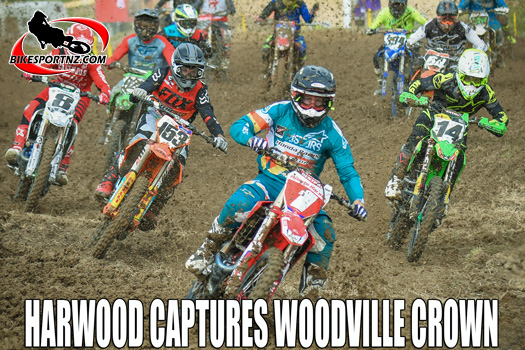 The racing was intense at the weekend’s 59th annual New Zealand Motocross Grand Prix at Woodville.

And if what transpired at the Honda-sponsored spectacular two-day event east of the Manawatu Gorge is a foretaste of what’s to come at the FOX-sponsored senior New Zealand Motocross Championships, that kick off at Balclutha next weekend and the junior nationals in April, then motocross fans are in for an extremely hot season.

The Woodville GP is the biggest two-day motocross event in New Zealand and typically attracts full fields of riders and a bumper crowd, an indicator that motocross numbers are growing across all classes, including juniors, and the sport is looking extremely healthy.

A huge number of Australian riders made the trip to Woodville this year, continuing the high interest that is traditionally shown in this event from across the Tasman Sea.

Next year’s Woodville motocross will be the 60th annual event and special celebrations are being planned for that.

The 24-year-old builder from Royal Heights lodged a 1-1-2 score-card from his three MX1 class races on Sunday, edging out Australian visitor Kirk Gibbs (Yamaha, who finished 2-2-1) and Waitakere’s Ethan Martens (Kawasaki, 5-4-3) for the podium positions.

Defending Woodville champion and current national MX1 champion Cody Cooper, from Mount Maunganui, appeared out of sorts as he was still dealing with a neck injury that he suffered a month earlier and he settled for fourth overall, albeit just three points off a podium result.

This foursome will reignite their battles at Balclutha this coming Saturday – joined by the rest of the nation’s elite racers – and it is sure to be an intriguing competition, with Cooper assuring that he will be much closer to full fitness.

With 49 riders lining up for the MX2 (250cc class), the morning’s qualifying was intense and, indeed, so was the racing that ensued on Sunday afternoon.

“The racing was super competitive throughout all the classes. The weather was great and the (races-within-races) ANZAC Challenge Cup, with all the Australian riders here to compete, was fantastic. The Go Girls Racing Team from Australia has already announced that they are coming again next year. I think it’s a great initiative and it’s good to see that New Zealand won this Trans-Tasman battle.

“We look forward to another great Woodville next year.”

There will be little rest for many of the riders, with the first of four rounds in this year’s FOX-sponsored senior New Zealand Motocross Championships kicking off in Balclutha, near Invercargill, this coming Saturday.