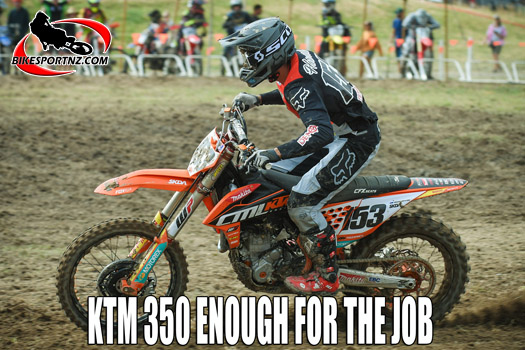 It was close to a perfect performance from Auckland’s Hamish Harwood at the weekend as he won New Zealand’s most prestigious motocross crown.

The KTM rider from Royal Heights was at his scintillating best when he qualified fastest in the premier MX1 class at the weekend’s 59th annual New Zealand Motocross Grand Prix at Woodville.

And that was just the taste of things to come, the 24-year-old builder then taking his 2020-model KTM 350SX-F to win the first two of three MX1 class races during Sunday’s senior programme.

He made a small mistake while leading the third and final MX1 race of the weekend, handing the advantage to visiting Australian rider Kirk Gibbs (Yamaha), but Harwood then took the sensible option of just settling into a rhythm and accepting runner-up spot in that last outing, well aware that he had already done enough to win the title outright.

Gibbs, who had previously raced a KTM bike to win outright at Woodville in 2015, finished the day second overall, with Waitakere’s Ethan Martens (Kawasaki) capturing the third podium position.

“The KTM 350SX-F is a slightly bigger bike than the one I rode to win the national MX2 (250cc) title last year, but we’ve got the suspension sorted now to how I like it.

“I knew I only needed to finish in the top three in that last race, so when I buried the bike in a soft corner, I lost my lead. The track was quite slippery in places and I didn’t need to win, so just rode sensibly to wrap it up.

“I loved the bike … it’s got a smaller engine than the 450cc bikes that my rivals are using, but it had more than enough power for me to go up against them and get the job done.

“It’s not going to be easy winning the MX1 class at the up-coming nationals, but I think I have a good shot at it and showed here that we’ll be very competitive. I can’t thank the CML KTM team and my wife Caydie enough for the work they all do for me.”

There will be little rest for many of the riders, with the first of four rounds in this year’s FOX-sponsored senior New Zealand Motocross Championships kicking off in Balclutha, near Invercargill, this coming Saturday.