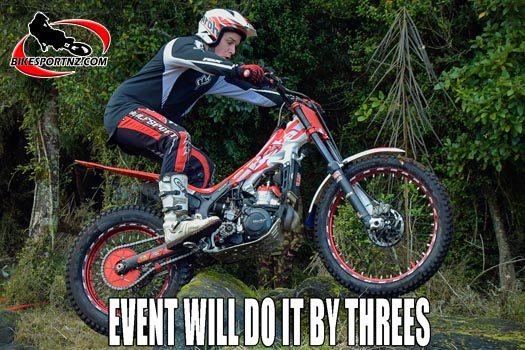 This year’s annual New Zealand Trial Championships will be doing things by threes.

The championships will be held in Hawke’s Bay this coming Labour Weekend and will test riders at three different extreme venues over the three days.

In addition to that, the AdrenalinR Mufflers-sponsored contest will feature intriguing match-ups between a trio of separate three-rider groups that are each made up from three generations.

Paraparaumu’s John Lawton is the patriarch of the Lawton clan, with son Stuart Lawton and grand-son James also entered; Tauranga’s Nigel Shilton lines up this weekend alongside his son, Phillip Shilton (pictured above), and his grandson, Cayden; and Hawke’s Bay fans of the sport will be thrilled to observe Hastings veteran Jeff March compete alongside son Luke March and grandson Ben. 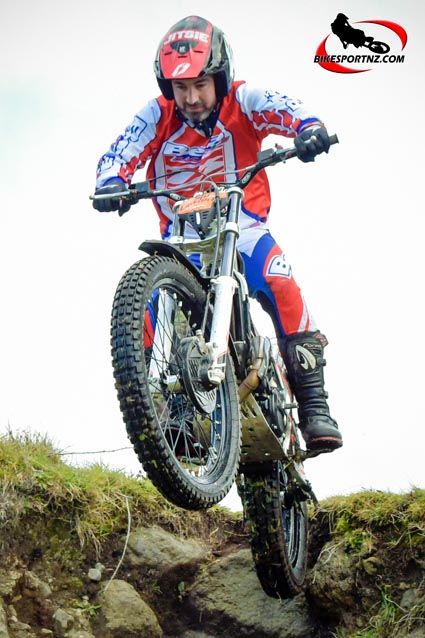 Paraparaumu’s Stuart Lawton, leading a three-pronged title attack on behalf of his family this weekend. Photo by Andy McGechan, BikesportNZ.com

Event organiser Warren Laugesen, himself a remarkable seven-time former winner of the premier title, said it shows that trial riding is “a great activity for all the family”.

“We are pretty excited to have a new minis class this year too. We want to encourage newcomers to the sport because this is a potential growth area.

“This is where we offer something for the next generation of riders coming through,” he said. “It would cater for riders aged up to 14 years and allows for electric and petrol-engine bikes. The courses laid out for the minis won’t be too daunting,” he added.

It will certainly be challenging for the senior riders, with tricky terrain set to feature steep rocks and treacherous creek beds.

Laugesen said that two of the venues had never before been used for national-level trial events, so there may be a few surprises in store for the riders.”

The event runs from Saturday through until Monday and will test these elite riders over multiple laps on each of the three days – with each lap including a dozen difficult sections – and at three entirely different locations.

It is expected that Wellington youngster Dylan Ball will lead the charge to the top of the rankings in the premier Experts Grade class this year, although there are still plenty of contenders to watch out for, including Stuart Lawton, Taranaki’s Matt Foster and Christchurch’s Jules Huguenin.

The 15-year-old Ball has ridden internationally and he won the 2018 North Island champs in this top grade and also won the Junior Grade at the nationals last year. He has been knocking on the door for greater honours too over the past 12 months.

Australian rider Kevin Zarcynski won the main trophy last year, but he will not be back to defend the title this time around.

Motorcycling New Zealand trial commissioner Paul Jackson said the sport was looking healthy and there are “a few things we are working on to see it pick up some more”.

“The minis and juniors is where it’s at … and it will be good to see if we can get these young ones hooked into the sport,” he said.

In addition to the Experts and Minis Grades, the competition this weekend includes A Grade, Intermediate, Presidents, Sportsman, Clubman, Twin Shock, Women’s and Junior grades in the programme.

Run by the Hawke’s Bay Motorcycle Club, day one of this event is set for Tongoio, north of Eskdale, on Saturday (October 26), with day two at Waitara Road, off the Napier-Taupo Road, and it all wraps up with day three at Dartmoor on Labour Day Monday.