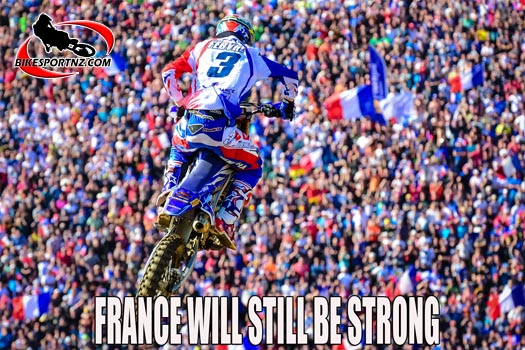 An injury to Romain Febvre at the weekend’s MXGP event in Sweden has forced a reshuffle for the defending French team for the upcoming Motocross of Nations in The Netherlands.

However, such is the depth of talent available to the French, they may still be considered one of the favoured teams at the 2019 MXoN.

After finishing runner-up in the opening race, Febvre was chasing the Grand Prix victory in race two. The 2015 MXGP world champion took the holeshot and led the first 13-laps before high-siding over a single-jump after changing his line to pass a rider that was one lap down. He landed heavily on his left thigh and was immediately taken to the trackside medical centre.

The doctors and paramedic’s onsite confirmed that his left femur was broken and transferred him to Trollhättan hospital where he underwent an operation on Monday afternoon to have a rod surgically inserted into the bone for stability.

Febvre will recover from the operation under the watchful eye of his surgeon at the Trollhättan hospital in Sweden until he is fit enough to travel back to his residence in Belgium.

Sadly, the injury will rule Febvre out of the final two MXGP rounds as well as the Monster Energy FIM Motocross of Nations at Assen, in The Netherlands, on the weekend of September 28-29, when he had been hoping to help take Team France to a sixth consecutive victory at the great event.

KTM rider Tixier, who helped Team France to victory at the MXoN in the United States last season, is currently running 20th in the MXGP world championships. Tixier finished 17th and 11th in the two MXGP class races in Sweden and ended the weekend 13th overall.

Tixier was MX2 world champion in 2014, but MX2 duties for Team France at the MXoN still rest with Tom Vialle (KTM).

Vialle twice finished runner-up in the MX2 class in Sweden, winning the GP overall. He is currently fourth overall in the championship standings.

Everts, Bailey and Paulin are eclipsed on the winning statistics by Britain’s Jeff Smith and American Jeff Ward (who were winning team riders on seven occasions) and Belgian Roger DeCoster (who has six MXoN wins to his credit).

Paulin has been an integral team member each time France has won the MXoN in recent years (France also won the MXoN in Belgium in 2001, with riders Yves Demaria, David Vuillemin and Luigi Seguy raising the Tricolour on that occasion).