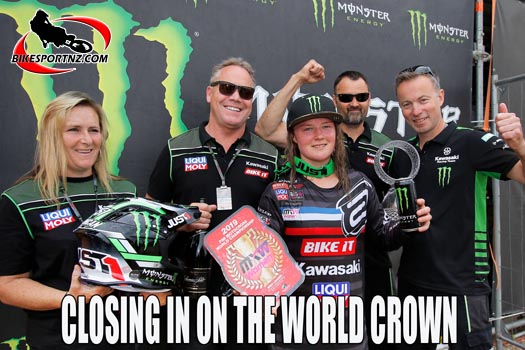 She has been the fastest female motocross racer in the world for almost four seasons and now may be the time for her to claim the silverware that goes with it.

New Zealand’s Courtney Duncan will possibly never enjoy the advantage of racing a Women’s World Motocross Championships (WMX) event on her home turf, but she has consistently defied the odds to lead the world championships on so many occasions.

However, luck has consistently abandoned her over the past three years.

Duncan and her massive fan-base back home will be hoping she can finally bring it home in 2019.

The Otago rider leads this year’s series after three of five rounds and will defend her advantage at the penultimate round of the series at Imola, in Italy, this weekend. The weekend’s programme is shared with the MXGP riders, the fastest men on the planet, as they battle through round 15 of their separate world championship series.

“There was a big gap between the first few rounds so I went back home after each one but now I will stay in the UK with the team until the end of the series,” she explained after celebrating with her Bike It DRT team after the ninth GP victory of her career a couple of weeks ago at the Czech track at Loket.

Now leading the series by 14 points, the 23-year-old will race the Imola track for the first time after she had missed the final round of the championships at that same venue in Italy last year.

“It’s been a good year so far and I feel confident, but anything can happen so we’ll take it race-by-race and we’ll see what I can do,” she added before heading to Italy.

Joining the series four years ago, Duncan was immediately competitive as she won three GPs and led the championship in her rookie season and, since 2016, she has been one of the fastest girl of the series every year, winning races and holding the red plate regularly.

But she had never been able to complete the previous seasons without injury, a fact which cost her the chance to clinch the title.

“For sure I had some tough seasons. I’ve always had the speed to win but I didn’t have the complete package to win a world championship. I feel much wiser this year; I feel different and it’s been nice to change team.

“I had spent all my career with another brand, but I think the Kawasaki suits me perfectly. It’s the first time in my career that I race green and it was a big move when I made this decision to join Steve Dixon’s team.

“I’m really enjoying my time; the entire team wants to win and that suits me perfectly. When I’m behind the gate and put on my helmet I only want to win,” she admitted.

Having won 19 GP motos during her world championship career she has a host of racing experience and has never been so close to attaining her dream.

“I got my first bike when I was seven; I grew up outside of the city, rode with friends after school and then raced at weekends. I was a really competitive kid in all sports; I did many sports but when I was fourteen or fifteen I decided to take motocross more seriously. I grew up racing with the boys; there was also a class for the girls in New Zealand but I raced both, the challenge was always greater,” explained Duncan, who had a first taste of GPs watching her compatriots on television.

“I watched MXGP as we had Ben Townley and Josh Coppins doing well, as well as Katherine Prumm – twice winner of the Women’s World Cup in 2006 and 2007 on Kawasaki – and I saw it was possible to race for a world title. It’s not easy coming from so far away; the challenge is great and it’s tougher for us and to make it is a long way.

“The biggest challenge is that you’re far away from family and friends, but when we come over from Australia or New Zealand we have a strong motivation as we really want to succeed,” she concluded as she prepares to defend her championship lead in the last two rounds of the series.