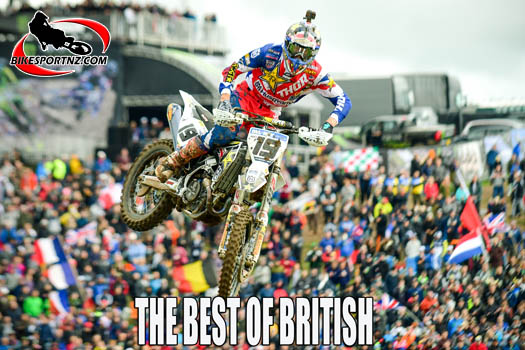 The British have announced their official line-up for the upcoming Monster Energy FIM Motocross of Nations at Assen, in the Netherlands, on the weekend of September the 28-29.

Max Anstie (pictured here) will lead the Team Great Britain squad in MXGP Class, while Ben Watson will compete in MX2 and Shaun Simpson will be the team’s Open class rider.

Britain finished third overall at the MXoN in Red Bud, Michigan, in the United States last year – that 2018 team comprising Anstie, Watson and Tommy Searle – as Team France made it five outright MXoN victories in a row (and six in total).

The Brits are the second best team in terms of MXoN wins over the long history of the event, having topped the podium at this event a staggering 16 times in all (behind the United States, with 22 wins).

The last time Team GB won the event was at Roggenberg, in Switzerland, in 1994, with the team on that occasion comprising Kurt Nicoll, Rob Herring and Paul Malin.