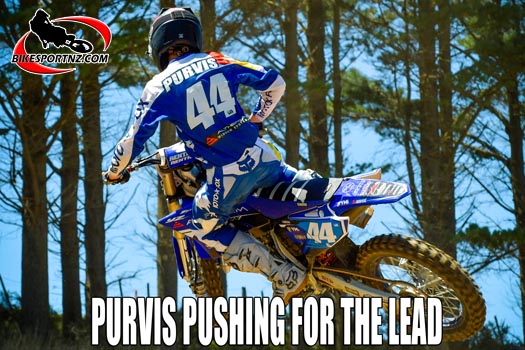 Moree, in New South Wales, will host round eight of the 2019 Australian MX Nationals this weekend, with Kiwi hero Maximum Purvis among the elite riders entered.

Mangakino rider Purvis (Yamaha) is currently second overall to Australian Regan Duffy (KTM) in the MX Development Class (Under-19) and the young New Zealander has shown he’s more than capable of moving up. He finished 1-2 in his two races at the previous round at Gympie last month.

Returning to the series calendar after a few years off the schedule, MX Nationals series promoter Kevin Williams expressed his enthusiasm to be heading back to the venue at Moree.

“It’s a great feeling to be heading back to Moree and this time we are bringing the tightest points chase in MX Nationals history with us. Riders and teams will be doing everything they can to secure an advantage in the chase to the championship on this last weekend of racing before the series final. For current and new fans of the sport, this is a race event not to be missed.”

In the MX1 class, the Championship is now wide open after DPH Husqvarna’s Todd Waters had an off weekend of racing at the previous round at Gympie, relinquishing the series red plate to new championship leader CDR Yamaha Monster Energy’s Luke Clout. Raceline KTM THOR rider Hayden Mellross also took advantage of Waters’ off weekend to catapult into second in the series points. With all three only separated by twelve points in total, this series is coming down to the wire and Moree will prove a huge momentum swing for the rider able to leave with the red plate heading into Coolum.

In the MX2 class, DPH Husqvarna’s Wilson Todd continues to lead the championship. However he now has Penrite Pirelli CRF Honda’s Kyle Webster hot on his heels after a big win at Gympie, cutting the points lead in half to just 10 points.

Yamalube Yamaha’s Jay Wilson is still in the championship fight in third, but it is coming down to a two horse race with Webster and Todd going head to head at Moree for that all important advantage heading into Coolum. With Serco Yamaha’s Nathan Crawford winning his first moto of the 2019 season at Maitland, you can bet he will be aiming for more podiums, taking points away from the championship contenders in the process.

The MX Development class will showcase the up-and-coming young talent in U19’s age group who always show speed and intensity on the track.