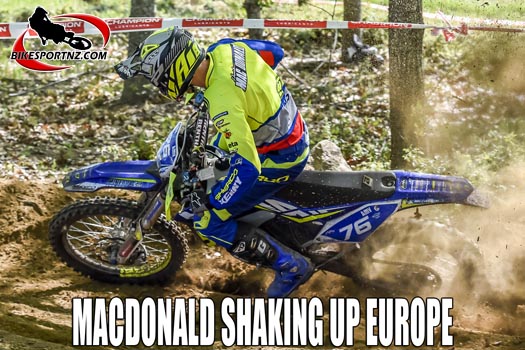 New Zealand’s Hamish Macdonald may win a world championship title before he ever wins a national one, but that doesn’t perturb the dirt bike hero one little bit.

The Christchurch rider had to settle for third overall in the New Zealand enduro Championships in 2017 – finishing behind his champion elder brother Angus and Taupo’s defending national champion Brad Groombridge that season – but now Hamish Macdonald is shaking up the sport on a world stage.

For the second consecutive season now, the 20-year-old Hamish Macdonald has been racing on the other side of the world, against the elite of the enduro scene in the 125 Youth Cup class of the FIM Enduro GP World Championships.

Finishing no worse that sixth all last season – and celebrating two wins in Italy – Macdonald wound up a close second overall in the 2018 125 Youth Cup world series, finishing behind Chile’s Ruy Barbosa and ahead of Britain’s Daniel Mundell.

A factory rider for the French-based Sherco motorcycle company and fully focussed on moving up the rankings, he headed back to Europe in March to conduct testing with the team two weeks before the first of seven rounds of the 2019 world championships in Germany.

“We changed the suspension and engine and I felt really comfortable with the new bike set-up,” said Macdonald. “We didn’t know what expect, I’d had some setbacks over (the European) summer and couldn’t train as much I would’ve liked. 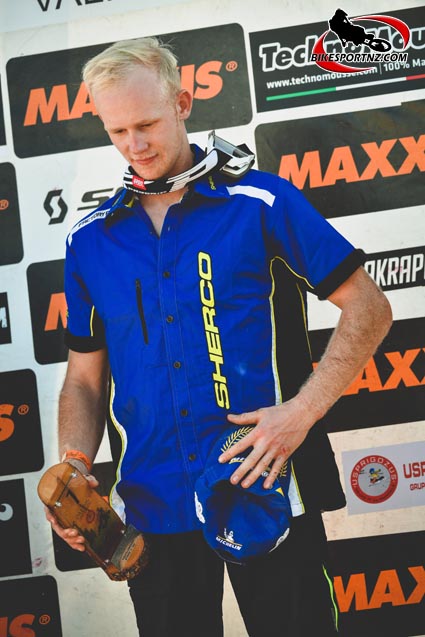 “New riders come into the Youth class each year, there were some fast Italians on board, I had no idea where my speed was at.

“Things turned out great with me winning on both days in Germany, and overall times were pretty good also,” said Macdonald.

“I am based in England with (British GP enduro rider and 2016 125 Youth Cup champion) Jack Edmondson and we challenge and push each other along, something that I don’t get opportunities to do very often in New Zealand. I got to compete in a round of the British Sprints Champs, with me placing runner-up, and it was a good chance to work on my speed.

“Next on the calendar was the GP of Portugal and we headed over to Spain for two weeks’ training at the Circuito Puigdemont complex. The hard-packed ground was ideal for familiarising myself with conditions prior to Portugal. It paid off because I won in Portugal, again finishing first on both days.”

With his succession of wins, Macdonald was now leading the world championships, 16 points clear of his nearest challenger, Italian Claudio Spanu, with another Italian, Matteo Pavoni, Spain’s Alejandro Navarro and Finnish rider Hugo Svard rounding out the top five.

But then disaster struck for the Kiwi hero.

“At the next round in Spain, things didn’t go to plan. I had a random mishap in the second-to-last test – I high-sided the bike (flung off the bike at speed) on some slippery rocks and took a hard fall on my shoulder. That was me out for the weekend with a broken collarbone and scapula.

“I have to admit, this was one of my biggest and scariest crashes, so I was happy to come away relatively unscathed.

“The FIM insurance plan is tops. I was straight into a Spanish hospital, plated and out the next day and then repatriated back to England. Five weeks later, I was back riding again. The scapula was still painful but I had no problems with the collarbone.

“We took the opportunity to head over to the Isle of Man TT races and get in some rest and recreation, as well as some training. The speed those bikes travel is mental. Not something I’d give a go.

“Local Isle of Man superstar International DJ Jed Etchels took us to some of (enduro GP star) David Knight’s training spots. This was a hard intro back into riding after injury.

The next event for the intrepid Kiwi was the Valle de Bergamont Enduro, at Rovetta, in Northern Italy.

“This definitely lived up to its name as an extreme event,” said Macdonald. “For me it was harder than the Romaniacs event (in Romania). I knew it would be tough, but didn’t realise it was going to be as tough as it was.

“Not being 100% fit, I threw everything at it, crashed heavily on my shoulder in the last test, but I was content to finish runner-up and gain some precious points. I started day two, but my injured shoulder couldn’t handle the rocky, rooted terrain.

“Knowing that I still have another day that I can drop – only the eight best results are to be counted for the Youth Cup competition – and we were heading into summer break, I decided to retire and fight the battle again when 100%. I currently hold on to third place in the championship, but I can still win it.

“So here I am, back in New Zealand for a seven-week (Northern Hemisphere) summer break in the series. My light training consists of mountain biking, swimming and gym work, with the odd motocross training thrown in.

“The Sherco Team have been a great help, taking me under their wing this year. They have a real ‘family’ attitude, which helps when you are away from home and I am slowly learning Italian. All the riders on the GP are very welcoming and friendly. Riders spend a great deal of time pre-walking test sections and we exchange good banter.”

The final round of the Enduro GP World Championships is set for Ambert, in France, on September 27-29.

In is interesting to note that Macdonald showed up at last weekend’s double-header, the final two rounds of the New Zealand Enduro Championships series near Hokitika on Friday and Saturday, and he won both days.

In fact, he was the only rider this season to win more than one round of the seven-race domestic series.