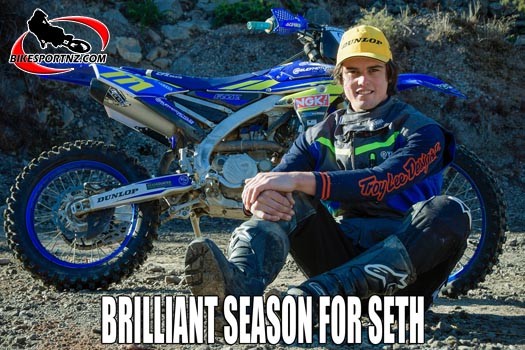 It has been quite a remarkable sporting season for Whanganui dirt bike ace Seth Reardon.

The 21-year-old finished overall runner-up in the four-round New Zealand Cross-country Championships, which wrapped up near Taupo in May, then took the same Yamaha YZ250FX bike – modified simply with the addition of a headlight, as dictated by the competition rules – and secured the outright win in the seven-round New Zealand Enduro Championships, which wound up near Hokitika at the weekend.

Reardon had built up an impressive 23-point lead after the first five rounds of the Yamaha and Mitas Tyres-sponsored New Zealand enduro nationals and so the pressure was mostly off for him at the weekend’s double-header, the final two rounds of the series near Hokitika on Friday and Saturday.

Christchurch international Hamish Macdonald (Sherco), at home for a seven-week spell as the FIM Enduro GP World Championships take their regular (Northern Hemisphere) summer break, won both days at Hokitika, but Reardon played it cool and twice finished third, easily enough for him to clinch his first national title.

Reardon, an apprentice engineer, knew he had a solid points advantage over his nearest challenger, Cambridge’s Beau Taylor (Husqvarna), but he was still determined to attack the tricky course.

“It was a challenge on both days,” said Reardon. “I’ve never raced in anything like that before. It was very swampy and difficult trying to go fast and not lose momentum and that tactic was risky too.

“I had a couple of minor moments on Saturday when I became cross-rutted (one wheel in one rut and the other in a different rut) … it was just a matter of choosing one of the 50 or so ruts ahead of me and blasting through. It was mayhem.

“It has been a very good season for me,” Reardon agreed.

“I have put in a lot of time on my bike and I think that is the key to me winning. The bike has been brilliant too and it has never let me down all season.

“I have spent a lot of time in the gym too because it’s hard to get out and ride when it’s dark after work. But I ride every weekend. I’m perhaps the fittest I’ve ever been, although you never can be fit enough for this sport.”

Reardon took the ‘overall’ trophy for the premier AA Grade (formerly referred to as Expert), ahead of Taylor and Tokoroa’s Jake Wightman (KTM), with Stratford’s Josh Hunger (Husqvarna) and Wainuiomata’s Jake Whitaker (KTM) rounding out the top five.

The next assignment for Reardon is to tackle the Yamaha-supported Grand National Cross-country (GNCC) series, which is due to kick off in the Woodhill Forest, west of Auckland, this coming Sunday (July 28).