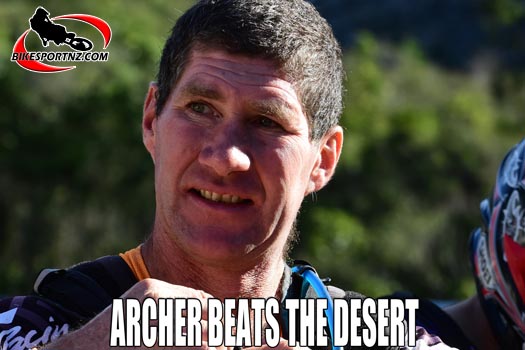 When it rains in the desert, an already daunting race can turn into a particularly nasty one, but Te Awamutu man Kevin Archer proved he was more than up to the task.

The 52-year-old Kiwi enduro legend had his second crack at Australia’s notorious Hattah Desert Race near Muldura, in north-west Victoria, at the start of July and this time he managed to place himself on the top of the podium.

And this was despite the event’s high attrition rate after heavy downpours, soon after the senior race start, forced organisers to cut the race short, ending it after four of the race’s planned eight 37-kilometre laps.

This year he was going it alone – while his daughter was away in the United States, racing the Grand National Cross-country Championships series there – and he finished 55th overall (in a time of two hours and 58 minutes), winning the Masters (45 years and over) class.

There were nearly 400 starters in the senior race, 42 of them in the Masters class.

The 2019 edition of the popular race started in the dry with rain threatening and, at the end of the first lap, the heavens opened. The rain quickly turned heavy and the ground quickly turned to a quagmire. Some riders thrived, many found it very demanding and 83 of the starters failed to finish.

The day began to take its toll as the rain continued and the track became impassable in sections, while some areas bikes almost disappear into bog holes.

Milner finished his four laps in a time of two hours and 14 minutes, crossing the line three minutes and 21 seconds ahead of Snodgrass.

“It was so muddy that some riders were even getting stuck in the pits,” Archer said.

“There were little rivers running everywhere on the track and the soil was like grinding paste on the bikes.

“I got the call-up from the Simford Husqvarna Team to ride for them. It’s the biggest privateer team in Australian and they had prepared a great bike for me, a Husqvarna FE501.

“The (Melbourne-based) team wants me to race for them again next year.”