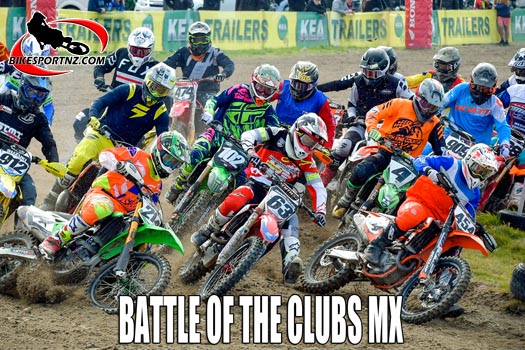 Rugby league has its State of Origin, and the New Zealand motocross community has its own version of the “mate versus mate” showdown, the Battle of the Clubs.

This Saturday the Taupo Motorcycle Club will host the tenth annual Battle of the Clubs (BOTC) motocross, a fund-raiser to assist New Zealand’s three-rider national team to again enter the sport’s “Olympic Games of motocross”, the annual Motocross of Nations (MXoN), this year being held at Assen, in The Netherlands, in late September.

Team New Zealand finished 17th overall out of 30 countries when the MXoN was staged in the United States last year, Bay of Plenty riders Cody Cooper and Rhys Carter and West Auckland’s Hamish Harwood waving the Kiwi flag at that event in Michigan. 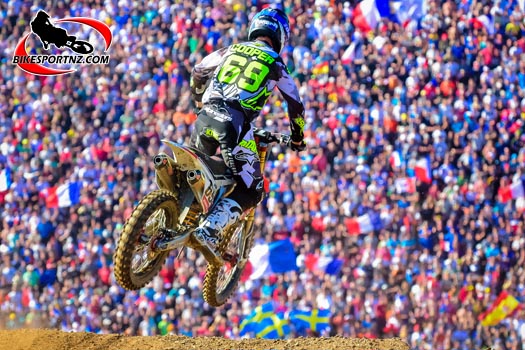 But it’s very expensive to send a team of three riders, their bikes, mechanics and everything they need to compete to the other side of the world each year and, with this in mind, the Taupo club came up with a domestic equivalent of this great international event, the BOTC.

The annual fundraiser initiative has provided a significant financial boost to the Team New Zealand campaign each year since the inaugural BOTC was held in 2010.

The BOTC encourages some of the country’s most talented motocross riders to put aside their traditional rivalries and brand allegiances and instead join together and compete under provincial colours.

The “State of Origin” format used for racing at the BOTC motocross will be very similar to what the Team New Zealand trio can expect when they line up in The Netherlands  against national teams from all around the world on the MXoN weekend of September 28-29.

Each of the national teams at the MXoN comprise just three riders – one on an MX2 (250cc) bike, one on an MX1 (450cc) bike and one on an open class (any capacity) bike. The club-based teams at the BOTC in Taupo will each comprise 10 competitors – four mini bike riders, three juniors and three senior riders – who will race bikes ranging in engine capacity from 50cc to 450cc.

Each contestant rides twice, with the three worst results to be discarded so that only 17 of the 20 results at the BOTC are counted in the final tally.

Racing this Saturday will again be at the popular Digger McEwen Motorcycle Park, on the outskirts of Taupo.

“We want to thank in advance the motorcycling community for their support,” said Taupo’s Bevan Weal, who will again co-manage the Kiwi team at the MXoN, working alongside New Plymouth’s Shayne King.

“The BOTC is a huge part of our fundraising for the MXoN. It is an awesome way for all the riders around the country to be a part of getting Team New Zealand to the other side of the world,” he said. 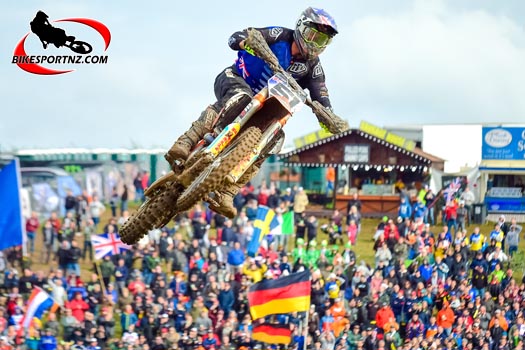 West Auckland’s Hamish Harwood (KTM), flying the flag for New Zealand at the MXoN in the UK in 2017. Photo by Andy McGechan, BikesportNZ.com

The Cambridge Motorcycle Club won the BOTC event for a record third consecutive time last year and they could again be one of the favourites to win this time too, with top national riders such as Jacob Steel, Reef Wheki and Carter Hanes set to wave the flag for them.

The Nelson Motorcycle Club will have national junior women’s champion Roma Edwards to fly their flag, while Christchurch has former national MX1 champion Justin McDonald, Tauranga has former world champion Ben Townley in its squad and Taranaki is boosted with multi-time former national champion Daryl Hurley on its roster.

Hurley and Townley have, on several occasions, represented New Zealand at the Motocross of Nations, including on two of the three occasions that New Zealand finished third overall at the event, Hurley in Belgium in 2001 and Townley in the UK in 2006.

More than $10,000 was raised at the event last season, that cash going towards New Zealand’s three-rider entry to the MXoN in the US last year, and it is hoped a similar amount will be raised to send the Kiwi team to The Netherlands this time around.

The three-rider squad representing France have won the MXoN for the past five consecutive years and they will obviously be among the favoured teams this time too.