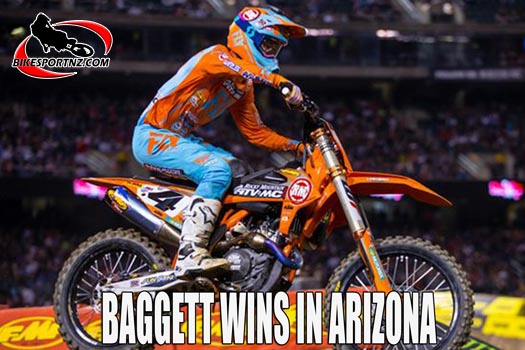 KTM rider Blake Baggett celebrated a career-first AMA 450SX victory on Saturday night with an incredible performance at round two of the series inside a packed State Farm Stadium in Glendale, Arizona.

Musquin, who qualified fourth earlier in the day, shot off the line in 450SSX Heat 1 to capture the holeshot and early lead. He battled back-and-forth for the lead spot before solidifying the win and top gate pick for the Main Event.

As the gate dropped for the main event, Musquin powered his bike to a second-place start, battling for the early lead before settling into third. However, the race saw red flag conditions early on due to a downed rider on the track and the field was re-set into a staggered start based on their current running positions. As a result, Musquin began third in line. Upon the restart, Musquin resumed his battle for a podium position but a few mistakes quickly dropped him to fifth. From there, the Frenchmen maintained a solid pace to ultimately finish fifth.

Musquin: “Glendale is always a big, big track and it’s always been a really tough race track for me, so I’m happy because this year was a lot better. I got a great start in the heat race and I got the win, so that felt really good to get back to the top even though it was just the heat race. I wanted to do the same thing in the main and I got a great start again and was leading at the beginning but then I got passed for third.

“I was behind [Jason] Anderson and I was pretty happy about my riding until they red-flagged it, unfortunately, for Malcolm Stewart that went down. Hopefully he is okay, that was a bummer to see. We restarted in our spots we were in, which was good because I thought we were going to have to restart the whole race.

“Unfortunately, I had too many mistakes in the first two laps and it cost me two spots and I lost too much ground on the other guys. Fifth place is not too bad considering all that happened in the main. It’s an improvement for me with the riding and the bike, everything was working good.”

It was a monumental night for the KTM-Supported Rocky Mountain ATV/MC-KTM-WPS team, who earned its first-ever victory in the 450SX class with an exceptional performance by Baggett in the closing laps of the main event. Baggett put himself in a favourable position off the start, rounding the opening lap in fourth and maintaining that position through the staggered re-start.

Baggett capitalised on his positioning to reach second just a few laps later and from there he worked hard to chip away at the leader’s gap. He continued to get stronger as the race wore on, making his move into the lead with three laps to go. Baggett held strong through the checkers to make history for himself and the team with a big victory in Glendale.

Baggett: “It’s good to just be able to feel good enough to run behind Jason [Anderson] and you know, I’ve had weekends where I can run with those guys and some weekends they just leave me in the dust, so it feels good to finally get my whole program together and be able to run with those guys. I’ve got to keep things rolling, it hasn’t hit me yet that I finally got a 450 win!”