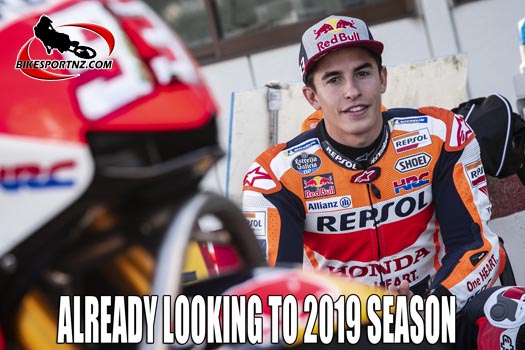 The noise from the 2018 MotoGP season has barely died away and Spain’s Marc Marquez is already thinking about 2019.

After returning to Europe after wrapping up his fifth premier-class crown, Marquez headed for Honda’s 2019 official presentation at the EICMA show in Milan.

He was on stage by fellow HRC personalities from the World Superbike Champs, MXGP, Rally and Trials, in addition to chief officer for motorcycle operations of Honda Motor Co. Noriaki Abe and HRC president Yoshishige Nomura.

“It has been a very long season, but we ultimately achieved our target and now it’s time to enjoy the feeling with my team, family and friends,” Marquez said.

“This weekend we’ll have a big party in my hometown, Cervera. Obviously, we still have the final race in Valencia to think about in two weeks, and our main goal there will be to achieve the Triple Crown by taking the Team Title in front of our fans.

“We know it won’t be easy but we’ll stay focused on the target until the very end.

“I’m also looking forward to testing the new bike on Tuesday after the race in Valencia, as we’re already thinking about having the best bike for 2019.”

Marquez will be joined by new Repsol Honda team-mate Jorge Lorenzo for the Valencia post-race test.

Meanwhile, record four-time World Superbike champion Jonathan Rea has said that Marquez is converting fans on and off the track with his personality and riding style.

Rea compared Valentino Rossi to the 2018 MotoGP world champion and said: “Unfortunately for Marc, he’s grown up in sort of a ‘Rossi Mania’.

“You go down the street here in London and you talk about motorbikes and people mention Barry Sheene or Valentino Rossi; Joe Bloggs won’t know anyone else and Marc’s doing a better job in this era.

“He’s the best rider in the world bar none.”

But the Northern Irishman, who holds the longest winning streak ever in WSBK with 10 consecutive victories, said that Marquez has carved out his own identity in Grand Prix motorcycle racing. Not only that, he added that Marquez’s personality is winning more and more fans.

“Each rider has their own specific style and, not that one’s right or one’s wrong but, I think Marquez’s style is Marquez’s style – it’ll be world famous forever. I mean, he’s taking racing to the next level.

“Every year I go to a motocross camp in Spain, and Marc had arranged that we go and ride on his assistant’s – José [Luis Martínez’s] – track. All my friends are Rossi mad. We put a truck-full of bikes on and we went there and it was a bit awkward. Afterwards I was finishing up and he had to jump off for a photo-shoot and then he came round to each and every one of my Manx friends that were all sat down talking about the day. He sat down with them and asked them each: ‘Hi, what do you think of the track and do you like it? Did you have fun?’

“And they went off from being Valentino fans to absolutely loving Marc Marquez.”