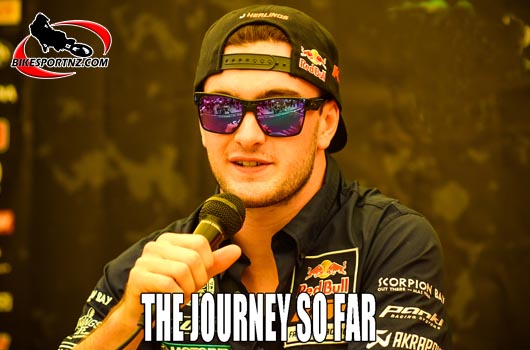 There are plenty more years of racing still left in Dutchman Jeffery Herlings, but he’s already achieved more in the past few years than many do in a lifetime of racing.

Widely known as “The Flying Dutchman” or “The Bullet”, the 23-year-old Herlings claimed his third MX2 world title in 2016 and is well on his way to winning his first MXGP world title this year.

Looking at Herlings’ dominance nowadays, it’s hard to believe he didn’t have an extremely glamorous amateur career, but he has the heart and determination of a true champion, and has persevered through the good times and the bad to achieve all that he has.

Although he won his first national championship on a 65cc back in 2002 (when he was just eight years old) it wasn’t until 2006 that he made an appearance on the international stage. At 13-years-old (in ’06) he tested his skills against the best in Europe when he entered the European EMX85 Championship, and while it’s hard to believe now, he only finished in 12th.

The promising young Dutchman went back to the drawing board and pushed his Suzuki RM85cc back to the line in 2007, where he managed to ride the wheels off of it for fourth in the European EMX85 Championship. That same year, he tried his hand against the best youngsters in the world at the FIM Junior Motocross World Championship, finishing in sixth.

In 2008, Herlings made himself a household name after he dominated both the European Championship and the FIM Junior Motocross World Championship in the 85cc class. Following that success, Herlings parked his little wheels and didn’t even bother racing a 125cc motorcycle. He became a man in a hurry and jumped straight on to a 250cc four-stroke bike.

In 2009, the 14-year-old star on the rise took a leap of faith and entered the most difficult amateur series in the world – the European EMX250 Championship – where he raced against riders much older than him and finished second overall. It was outstanding, and from that year forward he was touted to be the next big thing, which is why he didn’t waste any time in entering the FIM MX2 World Championship in 2010.

Never one to shy away from a challenge, Herlings was the youngest rider racing the FIM Motocross World Championship that year. He finished in sixth in his rookie season at just 15 years old. As he got bigger, he got faster, and in 2011 he finished second in the MX2 World Championship before dominating the Championship in 2012, claiming his first-ever world title with two rounds to go; an achievement which was repeated in 2013 when he added another world title to his net worth.

In 2014, Herlings was gunning for the three-peat, but he crashed and broke his femur at a charity event where he was riding an 85cc for fun. He finished second overall that year, despite winning 12 GPs. After a troublesome winter, Herlings rode a rollercoaster to hell in 2015. He was still the most dominant rider in the class and the easy bet for the title, but lady-luck was nowhere in sight that season, and he broke his collarbone and almost lost a finger before ending his season for good at the 13th round when he had a small crash and got pummelled by his team-mate, breaking his hip.

In 2016, Red Bull KTM Factory Racing’s MX2 star was fit and healthy and despite a minor hiccup where he broke his collarbone at a national race – which sidelined him for three rounds of the World Championship – he finally managed to get the job done at the penultimate round of the 2016 FIM MX2 World Championship in Charlotte, North Carolina.

It was a fitting end to his lighter bike days, as the three-time world champion moved to the premier MXGP class and now, after a tough first year in the class last season.

He was locked in a fierce season-long battle with multi-time MXGP champion Antonio Cairoli throughout 2017 and he was eventually forced to accept the runner-up position. But Herlings is now back on top of the world again, perhaps to be crowned 2018 MXGP champion at the final round in Italy this September.