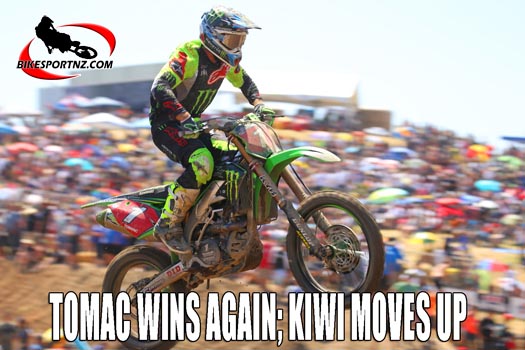 The United States motocross nationals, the Lucas Oil AMA Pro Motocross Championship, hosted its third round of the season on Saturday from Thunder Valley Motocross Park near Denver, Colorado.

New Zealand’s Cody Cooper also continued to impress, the 34-year-old from Mount Maunganui taking his Honda to 17th and 11th at Thunder Valley, good enough for 14th overall for the day.

Although a slight step down on what he’d achieved at the previous round in California a week ago – where he finished the day 10th overall – this result in Colorado was enough to see Cooper improve from 12th to 11th in the overall championship standings.

In the 250 class, Jeremy Martin powered his Honda to his first overall win of the season and moved into the championship point lead.

As the gate dropped on the first 450 class moto of the afternoon it was Yamaha’s Justin Barcia taking the holeshot with Suzuki’s Phil Nicoletti and Tomac in pursuit. Tomac made short work of Nicoletti to overtake second on the opening lap and began setting his sights on Barcia. However, after officials made the decision to throw the red flag in an effort to properly attend to a downed rider the moto would restart with the entire field back on the gate.

When the gate dropped for the restart, KTM’s Blake Baggett led the field into the first turn, followed by Honda Ken Roczen and Barcia, with Tomac just behind in fourth. The opening lap saw Roczen waste no time as he charged past Baggett for the race lead, while Barcia found himself on the ground and allowed Tomac to inherit third. The defending champion then passed Baggett for second on the following lap.

As Roczen rode effortlessly out front, Tomac began mounting a charge and started inching closer with each passing lap. The duo set a blistering pace and Tomac pulled alongside Roczen several times, but the German was able to successfully fend him off. With just under seven minutes remaining in the moto, Tomac’s efforts prevailed as he muscled his way into the lead.

Tomac could not be stopped once out front as he set the fastest laps of the race and cruised to his fifth moto victory of the season. The battle for second came down to the final lap between Roczen and Baggett, with Roczen narrowly edging out the KTM rider to finish second and third, respectively.

In 450 class moto two, Barcia once again put his Yamaha out front as he stormed to sweep both holeshots, this time ahead of Baggett and Tomac. Much like the first moto, Roczen was quick to attack on the opening lap as he took advantage of a top-five start and positioned himself into a pass for second, then pulling alongside Barcia for the lead, with Tomac in tow. Barcia fended off Roczen’s pressure and maintained his early hold on the lead.

With Barcia on a mission out front, Tomac made the move on Roczen to take over second on lap three. Barcia lost control and crashed out of the lead just moments later, which caused Tomac to come to a complete stop and manoeuvre his way by. The incident allowed Roczen and Baggett to move into the top two positions, while Tomac eventually resumed in third.

On lap five, Baggett cross-rutted entering a turn and shot off of the track, which allowed Tomac to slip by into the runner-up spot. Tomac once again displayed blistering pace as he set his sights on Roczen and began chipping away at his lead. Tomac worked tirelessly for a way around Roczen, who used crafty line selection to shut down several pass attempts. With just over 10 minutes left in the moto Tomac got a strong drive right after the finish line and successfully made the pass stick to move into the lead.

Tomac continued to charge through to the finish and took his sixth straight moto win of the season by 11.4 seconds. Roczen backed up his first moto result with an impressive second, followed by Baggett in third.

It’s the first time in his career that Tomac has opened the season with three consecutive overall wins and an undefeated moto record of 6-0. It was his first 450 class win at his home race, and the 12th of his career. Roczen finished second overall (2-2) and landed on the podium for the first time since the final round of 2016, 14 races ago. Baggett claimed his first podium finish of the season in third (3-3).

“I’ve had some funky stuff happen here at Thunder Valley, so I just wanted to leave here with a good result,” said Tomac. “The lines were a bit off early in the day in practice, but it developed and really came around as the day progressed. Winning my home race in the 450 class is something I have wanted to do for a long time, and today we were finally able to get the job done.”

Tomac extended his lead in the 450 class standings and now sits 28 points ahead of KTM’s Marvin Musquin, who finished fourth overall (4-4) but was never a factor. Barcia’s sixth overall (5-6) was good enough to maintain third in the standings, 46 points out of the lead.