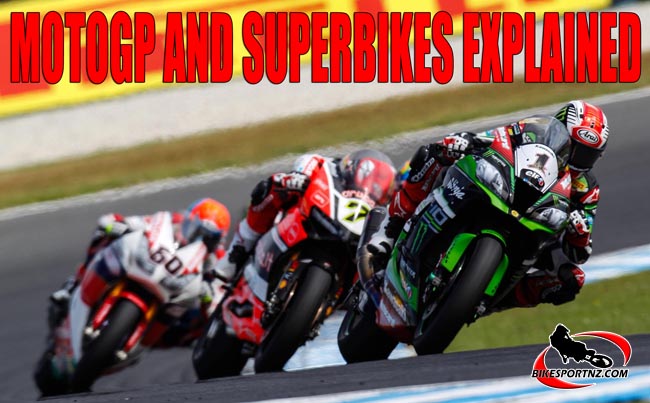 However, it is a dangerous world that must be ventured into with caution, as it’s nowhere near as easy as these rider make it seem.

This hopefully shows you where to look if you are beginner to the superbike thrill. This will help you understand the competitions so you know what you are watching.

This is the elite level of bike racing. The bikes used are prototypes that are always refined to stay ahead of the curve. Manufacturers go all out to show their capacity to integrate new technology, and the result is a competition that guarantees the fastest form of two wheeled racing, while attracting the very best riders from around the globe. The competition is held across many destinations every year to decide the world champion.

The machines used in these events are production-based superbikes, similar to the ones available in most superbike shops.   However, the engines may be slightly different. WSB bikes are to MotoGP bikes what touring cars are to F1 cars. WSB is exciting because riders are expected to race twice in a single day, the grids are larger than in MotoGP and racing is fought more closely. As is the case with MotoGP, superbike events are hosted in different locations all year round, but, understandably, the key differences between the two cadres of superbike racing comes to the fore in terms of sponsorship and participation.

MotoGP and WSBK – the differences explained

Fédération Internationale de Motocyclisme (FIM), the governing body of motorbike racing, organises and runs the two categories, but they are both very different. Here’s how they compare.

MotoGP is seen as the ‘Formula 1’ of motorbike racing, the pinnacle of two-wheel competition. Previously known as the 500cc class, numerous changes over the years mean the current MotoGP engine displacement is 1000cc. It remains one of the most exciting motorsport championships in the world and the racing is always insane.

This MotoGP season has 18 rounds, with each weekend featuring three 45-minute practice sessions; a rider’s time counts towards whether he will take part in the first qualifying segment or the second. The 10 fastest go to QP2, while the rest compete in QP1, and the fastest two progress to the second round.

The times in the first part will make up grid positions 13 and below, while the second section will decide the top 12 positions. Races on Sunday normally cover a distance between 95 and 130km and around 40-45 minutes, depending on the track. Pit stops rarely take place but they are allowed, especially in wet conditions when riders can switch to a bike with different tyre specifications. Points are awarded to the top 15, from 25 for the fastest driver to one point for the man who crosses the line in 15th.

The bikes are essentially prototypes, not like the ones seen on the road. This means that budgets in MotoGP for developing bikes and for the teams and riders are much higher.

The bikes themselves have a maximum engine displacement of 1000cc, with four cylinders and a maximum bore of 81mm. No engine supercharging or turbocharging is allowed, and only six gears are allowed. The minimum weight of a MotoGP bike is 158kg. The engines produce up to 240bhp and can reach speeds of up to 217mph.

There are three classes (which can get a bit confusing), with non-factory outfits falling into the ‘Open class’ and running spec hardware and software – whereas the manufacturers run Magneti Marelli ECU hardware and their own software. They run 24 litres of fuel a race, get 12 engines per season and enjoy unlimited testing.

The ‘Factory’ class runs with 20 litres of fuel, five engines, no engine development, limited testing and the hard and medium compound tyres that are supplied by Bridgestone. The ‘Factory with Concessions’ class runs with 24 litres of fuel a race, 12 engines per season, unlimited engine development and testing, the Magneti Marelli ECU, free development of software and the medium and soft tyre. However, a few of these can change depending on results.

Compared to MotoGP, World Superbike machines are slower, heavier and much more like the bikes you see on the road. The series regularly races at the same tracks as MotoGP, providing us with a good comparison of lap times. At Motorland Aragon, for example, the WSB pole position for race two in 2016 was a 1:49.884, compared to 1:46.635 for MotoGP.

The WSB series uses slightly-modified versions of production bikes, with production-spec machinery and electronics. It has to be a homologated version of any production-spec superbike available to buy around the world and there is little scope for innovation or changing the bikes themselves; the rules are much more restricted.

Like MotoGP, the minimum rider age is 18. Despite both being run by FIM, the race weekend formats are not the same. There are four free practice sessions spread across Friday and Saturday, before the two ‘Superpole’ sessions, where the grid is decided. This has actually been inspired by MotoGP, however, with the combined practice times resulting in the fastest riders going to SP2 and the slowest to SP1.

The first segment will see the fastest two riders make it to SP2 and the rest will line up from 13th. The next section of qualifying will decide the top 12 grid positions. There are then two races, with the distance being no longer than 110km. In 2017 there are 13 rounds, meaning 26 races in total, and the points system is exactly the same as MotoGP.

While restrictions are in place with regards to changing the bikes, modifications can be made to the exhausts, engine management, suspension, brakes and some engine parts. Minimum weight is 168kg and power ranges from 750cc to 1200cc depending on the number of cylinders, from two to four.

Bikes from the Kawasaki ZX-10R to the BMW S1000RR and the Aprilia RSV4 RF all race in the series and regularly produce thrilling action on the track. It’s seen as a class below MotoGP but is still a fantastic series, with great riders and a wide range of tracks.