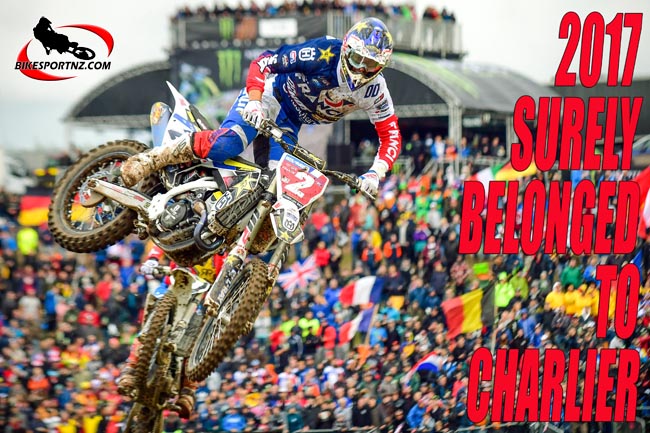 Last-minute Team France call-up Christophe Charlier ended up being one of the stand-out riders at this year’s Motocross of Nations in the United Kingdom.

To be fair, Charlier had earlier shown massive talent in the European 250cc (EMX250) class, claiming the title in 2009 ahead of a certain Jeffrey Herlings, but even when the Corsican showed flashes of brilliance in motocross Grand Prix events, he never seemed to reach his full potential.

A new Christophe Charlier emerged in 2017.

A change to the EnduroGP series admittedly unlocked a more confident and complete rider. In fact the Christophe Charlier 2.0 became so well-rounded and solid that he won the ISDE and MXoN with Team France in the same season, a feat no one else has pulled off in recent history.

With both Dylan Ferrandis and Benoit Paturel out with injury, Team France was in a difficult spot to find an MX2 rider of equal strength.

Some even questioned the sanity of MX of Nations team manager Pascal Finot when he picked Charlier.

It’s not hard to see how much of a surprise Finot’s choice was. Because Charlier hadn’t raced motocross in a year, he didn’t race on an MX2 bike in three years and, quite frankly, the man labelled “CC23” was the guy capable of blowing hot and cold in equal measures. 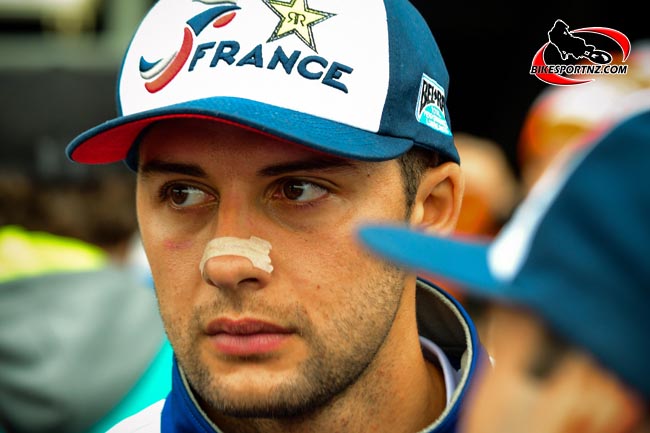 Even when his ISDE victory with the French team, podium results in the World Championship and Italian enduro title might have passed under the radar for most moto fans, Charlier re-established himself at the MXoN at Matterley Basin in Winchester, England.

In his first Nations participation in 2013, Charlier demonstrated speed.

Four years later he played a crucial role in helping France to another MXoN victory thanks to an outstanding sixth overall and second in the MX2 in his second moto. Talking about redemption!

You are arguably the most complete off-road motorcycle rider in the world now. How does that feel?

Christophe Charlier: “Thanks! Very surprised first of all. I quit motocross a year ago so to come back like this is not something I had anticipated. Especially because I had difficult weeks leading up to the MX of Nations. To practice I didn’t have a lot of time and just a standard bike. However for the weekend itself everything was absolutely perfect. I got the support from factory Husqvarna and the MX2 factory team of Jacky Martens has been brilliant. In fact everyone around me has been really supportive for the MX of Nations.”

Even the week before Matterley Basin was pretty difficult because you hit your head in the EnduroGP of Hawkstone Park. You suffered a light concussion, right?

Charlier: “Exactly, it wasn’t ideal. My head was hurting during the weekend and for two, three days my vision had been a bit blurred.  To be honest I’ve learned so much about myself and my body in enduro. That’s been a huge help to get a better understanding of how I feel and how to deal with such issues. I knew that the headache and troubles would pass so that I could be in the best shape for the Motocross of Nations. Enduro has helped me a great deal to improve in my riding too. Before I used to be out of my depth in the mud but last weekend everything went great. In the first moto I didn’t have the best start, luckily I turned things around in my second race! Overall it was just an unreal weekend.”

It looks like you’re stronger than ever mentally. Not only did you have to switch back to enduro, you had to race the MX2 bike and Team France came into the events favourites after winning the MXON three times in a row. That’s a lot to take on.

Charlier: “You’re right. I do think I’m stronger in the head now. I can’t deny that it has been a bit stressful though! On the other hand enduro is a lot about handling well all the challenges that are thrown your way. You have to stay positive no matter what. To have stress is one thing but you can not let it affect you. Before the motos I felt some pressure although I felt calm once I was on the bike.”

When did you know you had been picked for the team?

Charlier: “Only three weeks ago. When the team manager Pascal (Finot) called me, I didn’t hesitate one second! I immediately said yes.”

It must have been reassuring to know you did well at Matterley Basin before. You had won an MX2 moto there in the past.

Charlier: “True, on one hand the track gave me confidence. But first and foremost it was the trust that Pascal placed in me that made all the difference.”

Few teams go to the lengths of the French team as far as the preparation concerns. The riders and the team were in a training camp the week before with no access to social media. We couldn’t even reach you before the event!

Charlier: “That’s absolutely correct. I really believe that this approach bears its fruits you know. For one week we’ve been perfectly surrounded by experienced people to make the best of that last stretch of preparation. Not being disturbed by what’s going on online or on social media is a great example. This week also helped to form a bond with Gautier (Paulin) and Romain (Febvre).  We’ve been talking to each other a lot, giving each other advice. All of this translated into the results we had.”

Can you compare this experience with  your first MX of Nations in 2013. You actually rode the 450 even when you were still in the MX2 class.

Charlier: “Circumstances were completely different. At that moment in my career I suffered a lot from stress that’s why I didn’t reach my potential. I was getting way too many bad starts, made a lot of errors and I was riding too much on the edge in general. Compared to this period I’m way more relaxed now. You have to stay calm, do what you can and that’s it!”

Honestly no one would have said that it had been such a long time you did a motocross race. You had been going well on Saturday too. In conditions that had nothing to do with enduro because the track was still very good.

Charlier: “I actually felt great  from the start although I obviously lacked some race rhythm. Each time out my feeling on the bike improved.”

Enduro clearly made you a different rider. In what areas did you improve?

Charlier: “Actually riding in the mud, anything that’s slippery. Keeping control and using your head.  In general I would also say I made progress in better understanding myself. To know when you’re really tired and you should ease off, or when you feel great and you can push … Of course if you ride more mindful it will be easier to avoid injuries too.”

For anyone who starts in enduro the rules are challenging as well. Just pinning it is not enough, you have to think to win!

Charlier: “For me what makes it really interesting is the fact that you can’t leave anything to luck.  Make just one mistake and you can forget about the podium! As a result you leave some safety margin but in motocross it’s crucial to avoid mistakes too.”

Some people have the impression that enduro is the place where retired crossmen go. For the less informed it may even seem that success comes easy for those who come from motocross …

Charlier: “(smiles) Hmmm, enduro has changed too. There’s a lot of great riders coming from different backgrounds and everyone is pushing to raise the level. Lots of enduro riders who are perhaps not that well known would surprise you with their skills. My advice to motocross riders is to look around and see what they can learn themselves from enduro. Or get on a trial bike from time to time. The cool thing is of course that you can do enduro at many different levels but don’t be fooled by the headlight when it comes to competition, the pace is high!”

Thanks for your time and good luck in Zschopau for the EnduroGP final!