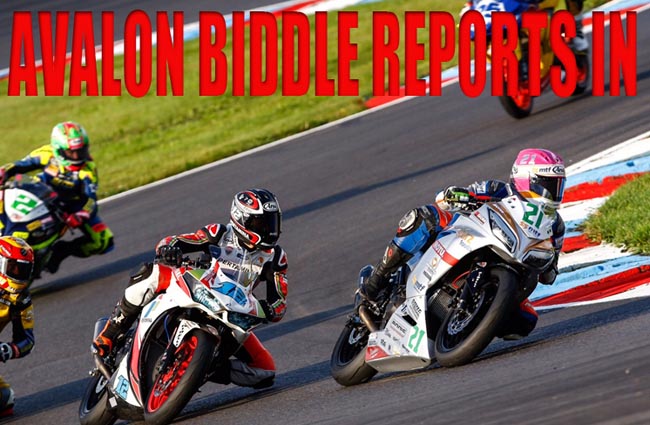 Competing in the World Supersport 300 series in Europe, Kiwi hero Avalon Biddle has taken time out from her busy schedule to report in on how’s things are going for her.

“These two past weekends I have raced in Assen and Lausitzring up here in Europe.

“My team and I decided to do the German national Championship event at Assen as practise before the following weekend was the first round back of the World Championship after the long summer break.

“Most teams were private testing at the circuit’s coming up on the World Championship calendar, but we thought a race event would get my brain in race mode and give me some more seat time at race pace. It did prove to be a great decision, as we had a very successful weekend.

“On Friday we were greeted at the circuit with the ‘Dutch summer’, which is … rain. I rode the morning session in the wet, then had one free practise in the dry.

“These went OK, but the final afternoon session, we made a large change to the bike which finally gave me the confidence to push the front end in the fast corners at this circuit. This is the feeling you need on these bikes with lower horsepower. What a difference. It was like finding the missing piece of the puzzle! I dropped my lap time to a 2.02, which is competitive, especially considering we were using the slower track layout of the Assen circuit.

“On Saturday I qualified 14th and after a good launch off the line, I had an amazing race-long battle with three other riders in Race 1 for the weekend. Racing closely like that was exactly what I needed and I eventually crossed the line in 14th overall, 5th in my class.

“On Sunday, we had one more race in the afternoon which was dry once again.

“In fact, there may have even been a little bit of sun! I got my best start of the season and kept great pace all race long while battling with many Dutch and German riders, ending up 9th at the chequered flag.

“This was 3rd in my class so I got to stand on the podium, spray champagne and now have a trophy to bring home to you all! The best part of the weekend was getting down to a 1.59.2 lap time in the second race, and making progress with the bike set-up, my confidence, and the team.

“I left Assen feeling much more positive and just four days later (and after a long eight-hour drive) found myself in Lausitzring for the sixth round of WorldSBK Supersport 300. Located in east Germany, this circuit is an enormous facility built by the state. The track itself has a lot of bumps and provides a real challenge to get your head around after the fast flowing European circuits such as Assen we have become used to.

“Friday practise started off well, making some positive set up changes in the first session to account for the bumpy track surface. Practise in the afternoon was another solid step forwards, although the lap time may not have reflected that. I rode by myself the whole session to find a consistent rhythm (something which I have struggled with the whole year on this motorcycle) and late braking points.

“Saturday bought our ’15 minutes of fame’ as I call it, because we only get one 7 lap Superpole session for the entire day. I struggled to find a group of fast riders to make use of the slipstream and qualified 36th on the grid for Sunday’s race.

“On Sunday I moved up a lot of positions with a tactical line during the first few corners of the race. After a dicey first lap, I crossed the line in a large group of riders and was able to hold my own with these guys, until my front brake lever came all the way into the handle bar in one corner.

“I lost some ground but was still ahead of where I qualified until I had to pull in to the pits because the brake was terribly inconsistent – not working some corners then being ok at others (we had this problem all weekend but it worsened during the race). This was Game Over and a real pity after what was an excellent start to the race.

“I’m trying not to get down about the end result; it wasn’t my fault. You need a good team and well-prepared bike behind you to succeed at this level, and if we started off the year with as much experience as the other teams I know it would be a completely different story.

“The class is so competitive and I don’t think anyone will ever believe just how much so, until they get out on track themselves. Also, it’s the world championship and that means only one person is ever really happy – the winner!

“I’ll keep you all updated regarding some exciting NZ racing news over t the coming weeks. Thanks for your amazing support which keeps my head held high.”