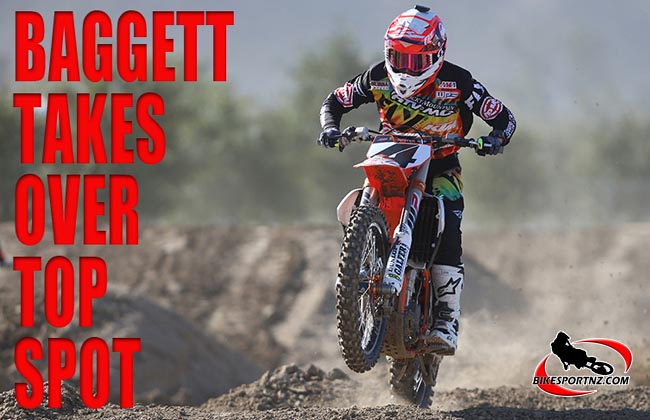 The fourth round of the United States Motocross Championships at High Point in Pennsylvania at the weekend saw yet another change at the top of the 450cc class, Blake Baggett becoming the third different rider so far to head the title chase.

Following a breakthrough first career win at the previous round, KTM rider Baggett kept the momentum rolling as he captured a second straight 450 class victory, taking control of the championship points lead along with it.

In the 250 class, two-time champion and Honda rider Jeremy Martin emerged with his first win of the season.

Tomac quickly found himself passing for third, however, he made a costly mistake that sent him to the ground and was forced to restart in dead last. At the completion of the opening lap it was Grant, Craig, Ferris, Suzuki’s Justin Bogle, and Baggett rounding out the top five. Entering points leader Marvin Musquin was buried in the field aboard his KTM and was credited with 13th position.

While Grant set a fast pace at the front of the field, Ferris went to work on Craig and took control of the runner-up position. Baggett used every inch of the track searching for lines and overtook Bogle for fourth on Lap 1. Baggett, who earned the nickname “El Cupacabra” after a heroic ride during the 2011 High Point National, continued his march to the front as he closed in on Craig and made the pass stick for third on lap two.

Ferris shocked the crowd as he began to chase down early race leader Grant, latching onto his rear fender and stalking his every move. Ferris would eventually pull alongside the Kawasaki rider through the deep ruts and take over the race lead with an aggressive pass on lap four.

Baggett had his sights set on the race lead and instantly began applying the pressure to Grant on lap four, following Ferris closely. Once into second, Baggett dropped the hammer and started to lower his lap times as he started reducing the gap to Ferris. On lap five, Ferris lost traction exiting a corner that resulted in a bobble, ultimately allowing Baggett to use his momentum and make the pass for the lead. Once into the lead, the KTM rider quickly used his creative lines and blistering pace to open a comfortable gap that he continued to build on with each passing lap.

As the chequered flag waved, it was Baggett who used a dominant performance to claim his second moto win of the season, more than 22-seconds clear of his nearest competitor. Ferris rode incredible to take the runner-up position in his first ever Pro Motocross moto, while early race leader Grant held on for his fourth moto podium of the season. Tomac recovered from his first lap mishap to finish 12th, while Musquin, who apparently entered the race with a nagging injury, battled through to finish 16th.

Tickle launched off of the starting gate to take the holeshot in moto two, edging out Husqvarna’s Jason Anderson, Tomac, Baggett, and Husqvarna’s Dean Wilson. In the opening stages of the race, Baggett made a mistake that cost him several positions, while both Anderson and Tomac moved their way around Tickle and into first and second, respectively, at the completion of the opening lap. Tomac was determined to rebound from a difficult first moto and was on a mission as he charged his way to the front.

Anderson and Tomac set a torrid pace that allowed them to open a small gap over the field early on, leaving the battle for third to unfold between a handful of riders. Tomac was hot on the heels of Anderson and capitalized on the leader, who made a mistake by missing his line in a turn, to overtake the top position on lap three. Once into the lead, Tomac demonstrated why he came into the season as the championship favourite and turned some of the quickest laps of the race to break away from the pack of riders behind him. First moto winner Baggett started to find his flow and began picking riders off one-by-one, and broke into the top five on lap four.

Just one lap later Baggett continued his charge forward and moved into podium position with a pass on early race leader Anderson. There was no slowing down Baggett as his blistering pace quickly put him onto the rear wheel of Tickle, who had passed Anderson for second, as they duelled for the runner-up spot. On lap six, Baggett made the pass stick to secure the position and put his head down in hopes of mounting a charge on Tomac.

Despite Baggett matching his lap times for several laps, Tomac went unchallenged throughout the remainder of the race to secure his third moto win of the season. He crossed the line 20.1 seconds ahead of Baggett, with Anderson following in third after a late pass on Tickle.

The 1-2 effort for Baggett was enough to clinch his second consecutive victory, which also made him the first double winner of the season in the 450 Class. Anderson finished second (5-3) and Tickle completed the overall podium in third (4-4), his first top-three result of the season. Dean Ferris crashed in the early part of the opening lap in Moto 2 and clawed his way back to 14th place to finish the round 7th overall.

“The new layout was really good, it was a little muddy this morning, but the track shaped up great for racing,” said Baggett. “I got off to decent starts today and I was able to kind of run away with the first moto win and cruise it in for second in moto two. I was going to make a charge for Eli [Tomac], but I was coming up on lappers quick and it’s hard to judge where they are going to go. It wasn’t worth hanging it out and taking the chance of crashing and handing the championship over, so I tried to be smart with my decisions out there.”

Baggett’s victory moved him from third place in the 450 Class standings and into the championship lead for the first time in his career. He holds an eight-point advantage over Musquin, who finished 11th overall after a stronger second moto (16-6).

Tomac sits third, 11 points out of the lead and just three points out of second. Baggett will carry the red number plate as the points leader for the first time next weekend, marking the first time a bike with the No. 4 will sit atop the standings since Ricky Carmichael back in 2007.