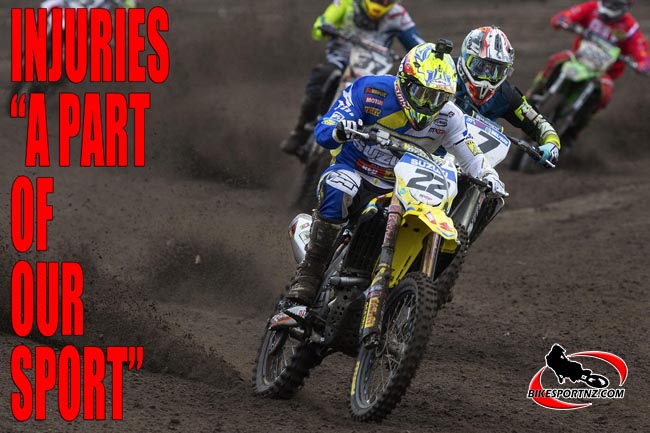 Suzuki World MXGP rider Kevin Strijbos will be sitting-out the next few rounds of the MXGP season due to an elbow injury that he sustained at the MXGP of Trentino.

After consultations with Dr Claes and Dr De Schrijver, it was decided that Strijbos would undergo surgery this week, with initial reports suggesting that the operation to repair the tear in the tendon and remove the inflammation in his elbow being a success.

At Valkenswaard, Strijbos was only able to complete half of the first moto before the pain became too much and he had to pull off the track, which meant he was then unable to line up for the second race.

The disappointed Belgian had this to say about his injury: “Sunday night I was in so much pain, so I knew we had to do the operation. Dr De Schrijver who has operated on me before performed the surgery and he said it went well. The tear has been fixed and the inflammation removed.

“Now I am in a cast for a week or 10 days, with the plan then to remove it and see how the recovery is going. If all goes well, I’ll replace the cast with a brace so I can start to do some more things with it. From then on, we have to see how it goes before I can give a real estimate for my next race. Prior to the operation, they said it’d be around four weeks before I can start mountain biking and then six weeks before I can be back riding motocross, only if everything goes really, really well.

“I prefer to take it week by week though and see how it’s progressing because I don’t want to come back too early and have the inflammation return. I’m going to rest-up for now and try to let it heal as much as possible before this next check-up. Then we’ll have a bit more of an idea about my recovery period.”

“Unfortunately, injuries are a big part of our sport. Of course everyone here wishes him the best with his recovery and that we’ll see him at the races soon.”

Obviously this is a big blow to Strijbos and to the Suzuki World MXGP team, who will now have Arminas Jasikonis as their sole representative on the RM-Z450WS for the next few rounds.