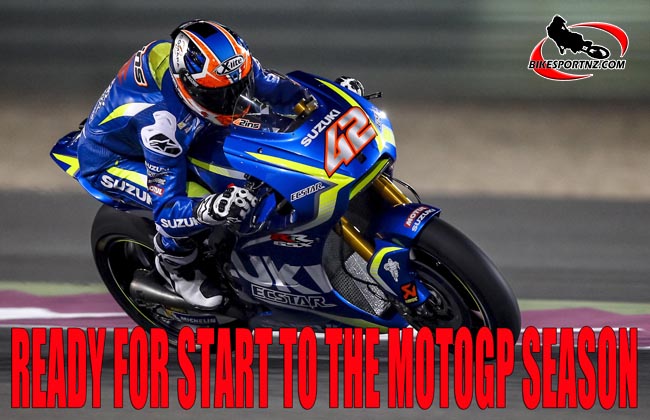 The fascinating circuit of Losail, with its floodlights and night race, will be the scene for the beginning of the 2017 MotoGP World Championship, which this year celebrates its 15th anniversary.

This season is expected to be an exciting one for Team Suzuki Ecstar and the arrival of two new riders, Andrea Iannone and Alex Rins, has renewed the enthusiasm inside the garage, with new challenges ahead.

The development of the GSX-RR has seen Suzuki engineers putting-in a lot of effort during the winter time, with many cutting-edge advances introduced to the factory machines. Although nothing has been radically changed, many aspects of the bike have been improved, resulting in great feedback from the riders during the pre-season tests.

Iannone and Rins (pictured above) are eager to kick-off the season and they are looking forward to measuring themselves against their competitors in a real race.

The 2016 season saw nine different riders stand on top of the podium, but with the title wrapped up with three races to spare, someone will need to knock Repsol Honda’s Marc Marquez off his perch to really kick-off the competition.

Last season, nine different riders stood on the top step of the podium, five more than both World Superbikes and Formula One. The mid-season run of GPs became something of a lottery with a run of eight different winners in as many races, and outside of the factory teams, the likes of Cal Crutchlow and Jack Miller were able to claim their maiden victories in the premier category.

But, there was to be no stopping Marquez. Five victories across the season – one more than fellow Spaniard Jorge Lorenzo – meant that a third MotoGP world championship was wrapped up with three races to spare, while both the F1 and WSB titles went down to the final race weekends of the season.

Now, the 24-year-old Marquez will bid to join the greats. He is already level in terms of MotoGP titles with Kenny Roberts, Wayne Rainey and Lorenzo, motorcycling greats by any stretch, and another title would see him join a trio of British legends in Mike Hailwood, Geoff Duke and the late John Surtees, who passed away earlier this month, as well as the American Eddie Lawson.

Despite his pre-season being disrupted by injury again – a dislocated shoulder that Marquez called “a little wake-up call” – Marquez is the favourite to triumph once again. His main rival, Lorenzo, has moved bikes from Yamaha to Ducati and will take time to settle, especially if pre-season testing is anything to go by and nobody should count out 38-year-old Yamaha ace Valentino Rossi from threatening.

Rossi’s Movistar Yamaha MotoGP Team is certainly keen to get the season underway, with Rossi and team-mate Maverick Viñales hardly able to wait to fire up their YZR-M1s’ engines under the floodlights.

After a busy winter, filled with extensive testing, Rossi is ready to get back into his leathers to challenge at the front of the field. He looks forward to start comparing some solutions found during the final pre-season test a little less than two weeks ago and to return to the premier class centre stage, fighting for the victory.

Viñales is set to make his official race debut for the Movistar Yamaha MotoGP Team this weekend and has his eyes firmly set on the top step of the rostrum.

During the off-season, he has consistently been one of the top contenders and is keen on keeping the trend going at the Qatar GP.

The Spaniard showed he felt comfortable at the test a fortnight ago, when he sealed his fourth fastest lap of the four official pre-season IRTA tests, but the youngster remains level-headed about his Yamaha race debut.

This weekend he aims to improve on his best MotoGP placement at the Losail Circuit, a sixth place in 2005. However, Viñales is certainly not unfamiliar with the Qatar podium, having clinched the Moto3 victory in 2012 and a second place in the same class one year later.