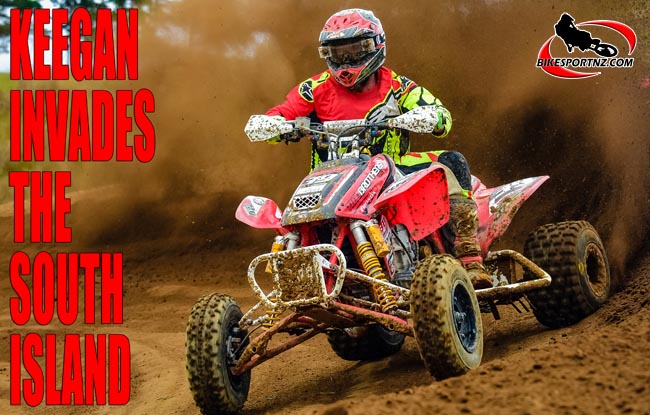 It has been a sensational few months for Taranaki’s Scott Keegan – winning his first national ATV title late last year and now collecting his first South Island title as well.

The 25-year-old block layer from Lepperton won the 2015 New Zealand ATV Championships in November, edging out his elder brother Camo Keegan on that occasion, and now he’s added the South Island ATV Championships crown to his trophy cabinet, again showing his sibling rival a clean pair of heels over the Queen’s Birthday Weekend event.

Scott Keegan won four of the seven premier grade races over the two days of action at Amberley, while main rival Camo Keegan won the other three, with Christchurch duo of Craig Cox (Yamaha) and Sam Henderson (Can Am) and Nelson’s Campbell Stratford (Suzuki) rounding out the top five.

“It was a motocross track with a few man-made jumps … it was a really cool track,” said Scott Keegan.

“The track was a real mixture, because there were also some very fast straights. It was dry and the weather was perfect, except that it was very cold.

“We usually cruise down south to do this event every year, but this is the first time I’ve won it.”

To make the long trip south even more worthwhile, the Keegan bothers also entered the ATV grade of the New Zealand Speedway Championships, which was held at Ashburton on the Monday.

“Craig Cox won that and I finished runner-up. I just didn’t have the right set-up for speedway,” Scott Keegan explained.

The Keegan brothers are now looking forward to tackling the Australian Quad Bike Nationals near Melbourne in September.

“This will be a first time for us. It’s going to be sick,” enthused Scott Keegan.

“It’s a lifetime opportunity to race ATVs at this level and we’ve been training hard for it. My fitness is not too bad at the moment, but I really do feel I need a little more seat time on the bike before I’m properly ready.”