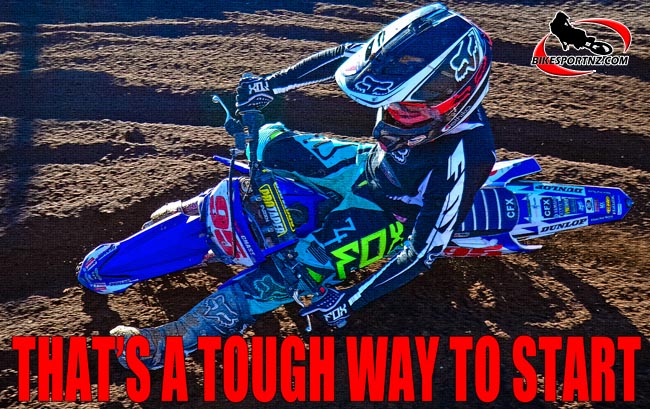 Taupo’s Wyatt Chase is made of stern stuff, but even his resolve would have been tested by developments in the United Kingdom at the weekend.

After exhibiting sparkling form throughout the early part of his New Zealand domestic season, successfully defending his national junior 125cc title in Hawke’s Bay in April, the Yamaha ace was primed up for action at what was in fact the fifth round of eight in the EMX125 championships on Saturday and Sunday.

Chase realised he has no realistic chance of featuring among the top rankings at the season’s conclusion, having skipped the earlier four rounds of the series, but he was still determined to impress at the last four rounds of the EMX125 before it all wraps up in Switzerland in August.

However, those plans took a nosedive at Winchester on Saturday when his bike mysteriously lost power and he crashed heavily on one of the circuit’s big jumps.

“It wasn’t a good weekend,” he said, in classic understatement, although he showed he has the pace to score points at this international level.

“I had trouble in qualifying and so had to go to the last-chance qualifier, where I managed to finish eighth to get into finals.

“In the first race on Saturday I had the 38th gate pick, so was right on the outside gate. I got a terrible start and was right out the back, but fought my way up to 21st by the third lap.

“But then my bike kept slowing down and, with two laps to go, it stopped on me on the up-ramp of the triple step-up jump just before the finish. I crashed and hit my chest on my handlebar pad and got pretty banged up.

“I decided not to line up for the next race,” he told BikesportNZ.com.

Despite the set-back, he remained philosophical and determined to push ahead with his European campaign.

“We will regroup, repair and try again at round six in Italy (this weekend).”

Fellow New Zealander Josiah Natzke, from Hamilton, was racing in the European 250cc Motocross Championship and he also had a difficult weekend in England.

“It was frustrating,” the KTM rider said. “In the first race I had a bad start and came through the pack. Then I tucked the front end and went down in the mud.

“In the second race I got a really good start and was running sixth for 15 minutes of the race, then had an issue and fell right back.

“I’m happy I finally put myself in a good situation to ride like myself, but gutted I couldn’t finish the race strong. I can’t wait for Italy this weekend.”