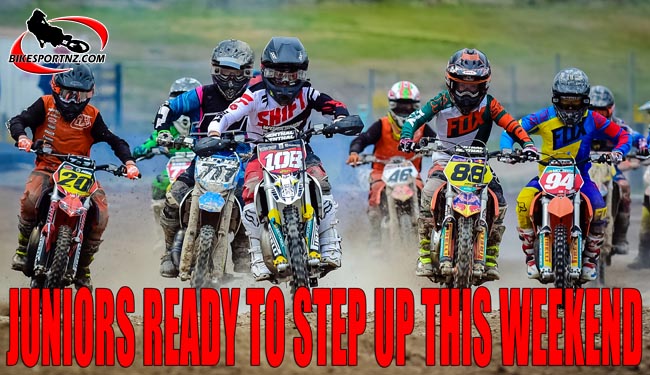 It will be all about young racers stepping up to be counted when the 2016 New Zealand Junior Motocross Championships blast off in Hawke’s Bay this weekend.

A traditional ‘nursery ground’ for the sport, this year’s Altherm JCR Yamaha-sponsored junior nationals should again offer a few clues as to where the senior champions of the future will come from and, if several notable past examples are taken into account, it could also hint at which individuals might even go on to become world champions in the years to come.

So plenty could be at stake for the future racing careers of young championship hopefuls this weekend.

Ohaupo’s Trent Collins is one rider who will hope to step up and be counted this weekend. He finished runner-up to Ngatea’s Ben Broad in the eldest of the junior categories last year and, with Broad now categorised as a full-time senior racer and out of the junior scene, the way is perhaps clear for Honda rider Collins to dominate the 14-16 years’ 250cc four-stroke class this time around.

Reefton’s Bailey Banks won the 12-14 years’ 125cc class title last season and Collins will need to be respectful of him too. Banks is now riding a 250cc four-stroke KTM bike and prepared to “mix it with the big boys” in the 250cc class.

However, Collins should also be in a confident mood after his recent successes in Australia.

Collins impressed with a runaway 10-second win in race one of the A grade 250cc class at round two of the Victorian Junior Motocross Championships at Warrnambool, Victoria, just over a week ago.

When another rider crashed in front of him at the start of race two, the Kiwi hero had to re-start in last place. A spirited charge through the pack saw Collins finish in fifth place.

The final race of the day was another good one for Collins, who quickly moved into third position in the opening laps, before reeling in current state champion, Cody Dyce, and making the pass for second place. Collins quickly pulled a gap on Dyce, although, by this time a hard-charging Callum Norton had pulled away to eventually win by a sizeable distance.

The win in race one, combined with his fifth and second-place results, gave Collins a solid second place overall on the day.

If Collins brings that sort of international form to Hawke’s Bay this weekend, he will be almost untouchable.

Meanwhile, it won’t be so much as stepping up, but holding strong for Taupo’s Wyatt Chase this weekend.

The 16-year-old Yamaha ace won the 15-16 years’ 125cc class last year. He returns to defend that crown and is unlikely to be threatened.

The real battling in this class will probably be for the No.2 spot, with Mangakino’s Maximus Purvis, Taihape’s Hayden Smith and Havelock North’s Ollie Ayre perhaps the most likely candidates.

Dunedin’s Grason Veitch won the 11-12 years’ 85cc class last year, but now steps up to the 12-14 years’ 125cc class and he will expect tough competition from riders such as Palmerston North’s Zac Jillings and Tuakau’s Jesse Te Kani.

The site for racing this Saturday and Sunday is at a relatively new venue, Ngaruroro Raceway, 160 Mere Road, Fernhill, just outside Hastings, with race action set to begin at about 10am both days.