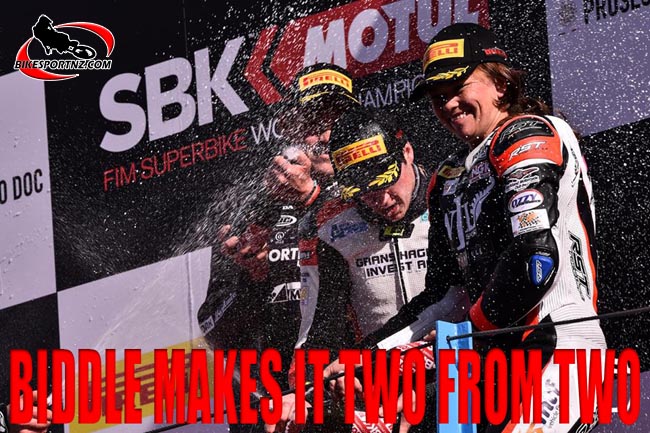 New Zealand’s Avalon Biddle is going from strength to strength.

The 23-year-old former New Zealand road-race champion from Orewa is well on her way to defending her FIM European Women’s Cup crown after another win at round two of the 2016 series at Assen, in The Netherlands, at the weekend.

Biddle won the European Women’s Cup Champion last year ahead of Estonia’s Anastassia Kovalenko and Swiss rider Laura Rodriguez, with Hungary’s Viktoria Kis and Britain’s Charlie Oakland rounding out the top five, and her 2016 campaign sees her still very much in command.

She won round one at Aragon, in Spain, at the beginning of April, crossing the line 15th overall against the men and first among the females in the parallel but separate European Junior Cup competition, while her nearest rival for women’s honours that day, Canada’s Stacey Nesbitt, finished a long way behind Biddle, in 27th position overall.

Biddle was even more commanding at Assen at the weekend, this time finishing 11th overall (and again she was the first female), while runner-up in the women’s classification was Switzerland’s Rodriguez, who crossed the line 23rd overall.

“I’m really happy with the result, getting ever so close to that top 10 (overall) is what I’m aiming for,” Biddle told BikesportNZ.com

“I’m showing better pace than last year. We now have a five-week break before Donington (in England) and, fortunately, I will be getting a bit of track time in before then which will definitely help in reaching that target for the upcoming rounds.

“Special thanks to MTF vehicle finance for supporting me in getting a van to use as transport up here in Europe.

“I was really excited to get back to Assen as the extremely high speed track was my favourite on the calendar last year. It’s a relieving feeling going into the race weekend already knowing the circuit layout, and being able to concentrate on going fast right from the first session rather than worrying about which direction the next corner goes.

“In this case, however, the first session wasn’t all about going quick straight away as the rain was pouring down and the track was completely wet all day Friday. We fitted wet weather (Pirelli Rain) tyres for the first time in two years and I took it easy to get a feeling for the conditions. I probably rode a little too cautious, ending up 17th fastest of the 31 riders, but at least much better off than the 14 bikes that crashed during the session.

“The fans packed in for Saturday which saw World Superbikes race one, and qualifying for us at 3pm in the afternoon.

“We couldn’t believe the support from the fans throughout the weekend. Once again when I was up on the paddock show stage there were lots of people listening in and also crowded around our EJC tents admiring the bikes & riders all weekend. For some reason  … good looks possibly? Ha ha … the two Kiwis, Connor and I, were a big hit with the school kids who were lucky to spend the day at the track.

“Qualifying was our first completely dry session of the weekend and I managed to ride in a group of extremely fast riders, picking up speed quickly and even proving myself stronger in some parts of the track. I ended qualifying in 12th position giving me a fourth row start for the race on Sunday. My mechanic James and I were really happy with this effort!

“Leading up to the race I have never seen conditions change so often and so quickly. It had organisers, officials and teams running around mental! The race prior to ours was red flagged three times; due to rain, oil spills and crashes. So I headed out on the warm up lap of our race not sure what to expect from the track conditions, but soon discovered they were pretty ideal. All of the corners were completely dry and the wind was a lot less gusty than previous days.

“When the lights went out it was as if my bike was launched out of a canon as I got off to a fantastic start, but was squeezed in turn one a little and lots a few positions.

“I still managed to round out the first lap in tenth position however. I then made mistake and two riders passed me on the second lap and gapped me quickly, but I was able to find more speed mid race and have a good tussle with a French rider on the closing laps. I crossed the finish line just 0.5 seconds behind him, in 11th position. Another great step forwards!! I was once again first female extending my championship lead in the Women’s Cup.

“We were even surprised with another amazing person to present the trophies on the podium – this time 2006 MotoGP World Champion Nicky Hayden.

“My physical condition was optimal throughout the race, there is just a few places I can make time up on corner entry. We’d like to try some different foot rest set-ups also as I am really struggling with my short legs that can’t reach the foot-pegs when hanging off the bike around corners! We will be working hard on these areas before the next race in Donington Park, UK, in five weeks’ time.

“Anyway, so far all is on track and the dream lives on! I’m more determined than ever to keep working hard and seeing if we can challenge at the very front in the upcoming races.”

Meanwhile, the European Junior Cup and European Women’s Cup race shared the weekend’s programme with the fourth round of 14 of the World Superbike Championships, and Northern Irish Kawasaki rider Jonathan Rae won both races, extending his championship lead to 45 points over Ducati’s Chaz Davies.

In a pulsating race a sudden rain downpour which had forced a restart in the earlier World Supersport race saw riders take on a slippery Assen circuit on wet tyres but with sunshine beaming on to the track it quickly dried up forcing mid-race pit stops.

Kawasaki duo of Rea and Sykes pulled off perfect stops at the ideal time to navigate the drying track on slicks before blasting clear of the chasing pack who opted to pit too late.

British Superbike champion Josh Brookes had led the first half of the race in the wet but after leaving his pit stop slightly too late he crashed on his out lap on a cold slick tyre to miss out on a potential podium.

Rea maintained a steady advantage over Sykes and, despite both riders enduring scary moments towards the finish, Rae completed a peerless ride.

World Superbike Championship standings after round 4 of 14: