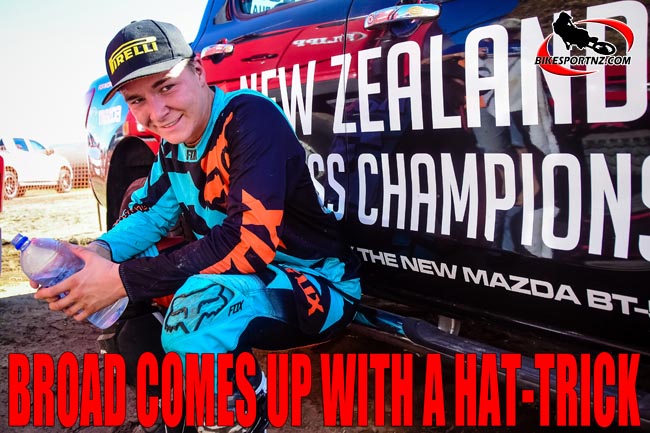 It was a return to the classroom for year 13 Hauraki Plains College pupil Ben Broad this week, but it was he who was dishing out the lessons on Sunday.

The 17-year-old motocross ace from Ngatea was in scintillating form at round two of the 2016 New Zealand Motocross Championships at the sandy Flipp’s Track at Himatangi, near Palmerston North, on Sunday.

Broad (Fox BikesportNZ.com KTM 125) was simply superb on the increasingly-rough track, fighting through traffic before racing his way to a hat-trick of wins.

He now enjoys a 28-point advantage over the new No.2 rider in this class, Taupo’s Wyatt Chase, who managed 3-2-2 results on Sunday.

Another to move up was Feilding’s Tony Cvitanovich, the just-turned 16-year-old rider climbing from fourth to third in the standings after taking his KTM 125 to a solid 4-4-3 performance on Sunday.

“The day could not have gone any better for me,” said Broad afterwards.

“I was determined to capitalise on my showing at round one (where he finished 1-1-2 to dominate the day there) and extend my lead.”

And that’s exactly what he did.

The rider who had come closest to threatening him at Timaru, Karaka’s Kurtis Lilly, had a tough time at Himatangi and has dropped back to fourth overall, behind Cvitanovich.

“I want to keep the same mentality as I’ve had from the beginning, to just concentrate on doing what I know I can do well. The key will be just to keep up the momentum, so that there will be no pressure on me for the final round.

“I should go well at the next two rounds (at Rotorua and Taupo). I like those track and have been training a lot at Rotorua, so I’m feeling confident.

“Taupo is Wyatt Chase’s home track and he’s my main threat for the championship, so I need to be in a strong position heading there.”

The South Islander from Takaka, who now bases himself in Waitakere produced a 1-2-1 score-card over his three MX2 class races at Himatangi on Sunday and has now stretched his championship lead from six to 17 points over the new second-ranked rider, Australian visitor Jed Beaton, from Victoria.

In the MX1 class, Gold Coast riders Dean Ferris and Todd Waters shared race wins between them and finished the day at Himatangi first and second respectively, with Mount Maunganui’s defending national champion Cody Cooper slipping back to third overall in the standings.

The second half of the Kiwi motocross calendar takes riders to the Rotorua Motorcycle Club’s track for round three on March 13, with the fourth and final round set for the Digger McEwen Motocross Park facility, on the outskirts of Taupo, on March 20. 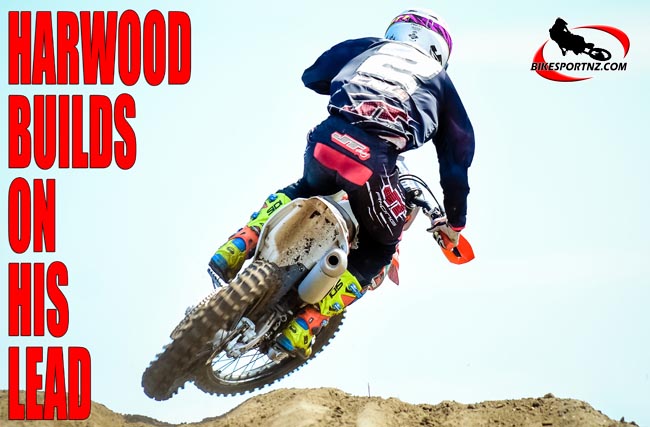