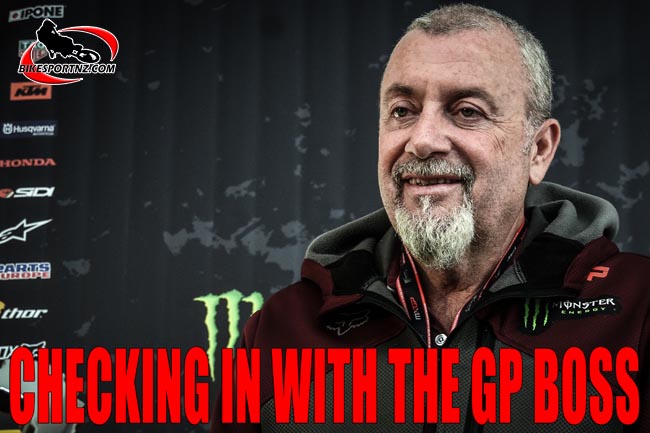 Here is another special item offered to us by our media friends at MXlarge.com, a sit-down chat with the man who moves and shakes the motocross GP world, Giuseppe Luongo.

There is no doubt in the minds of anyone who follows the FIM Motocross World Championships that the series is growing at levels nobody could have ever expected, well maybe everyone apart from the crew of Youthstream.

Leading the Youthstream charge is Italian businessman, Giuseppe Luongo. Of course, Luongo has a long history with the sport of motocross, with his 1990’s Masters of Motocross series, and the 1986 MXoN in Maggiora just the start of what has made him one of the greatest promoters in the sports history, if not the greatest.

It was his Masters of Motocross series that pitted the best AMA riders again the best GP riders. It is that concept that Luongo still wants in his era, and with two USGP’s in 2016, and a major addition to the series at the Charlotte Motor Speedway, we might just see more American riders lining up against the best from Europe than we have seen in decades.

Luongo recently visited America, and Charlotte Motor Speedway, and was more than a little excited to see the plans the promoters of this historical venue have for the future of the MXGP series.

We also asked Luongo about the new concept Youthstream have brought into the sport, the Riders and Manufacturers Cup, which is set for Germany in October.

Mxlarge: Giuseppe, firstly how was it visiting a place like Charlotte Motor Speedway, and seeing their professional approach to promoting this event? Have you ever been involved with somebody with this attitude to the event?

Luongo: The visit, the meetings and the press conference were all great. The SMI group is very professional and powerful, and it has a very long experience in promoting motorsports, they promote many NASCAR events in their 8 venues throughout USA, and are able to touch a large array of fans with their strong contacts with the US media. I was impressed by SMI’s approach to the event; they are motivated and, like us and our partners, they are really hungry to succeed with MXGP in Charlotte.

Mxlarge: American people are realizing how special MXGP is, and with the hard work of Youthstream, the teams, promoters and the American and European media it seems like the Industry in America are more excited than ever to see us arrive in 2016. How is your feeling from the American teams going into the two USGPs this year?

Luongo: We’ve been working hard and professionally with MXGP since a long, and our sport has grown year after year. Our aim is clear and we maintain our word therefore everywhere in the world, including USA, we win the industries’, media’s and fans’ respect, and today MXGP is accepted in the USA and Americans have a high opinion of MXGP. Youthstream has strong American partners: Monster Energy, SMI, GoPro, Parts Unlimited, FOX, FMF, Thor, Oakley and all our partners are very much supportive for these events in USA.

MXlarge: From watching the videos and reading the press releases it seems that the people in Charlotte are looking at trying to attract a lot of non-motocross fans, the casual sports fan. Along with the regular fans that should come due to AMA riders like Cooper Webb and Chad Reed already mentioning they want to race, is there a feeling from SMI of how many people they can attract for this event?

Luongo: Together with Charlotte Motor Speedway our goal is to fill the grandstands around the MX track and with a number of various promotional activities we are all working very hard towards this goal. SMI is able to touch all the casual sport fans in the State and surrounding, I was very pleasantly surprised when the day after the press conference everyone I met in town (in restaurants, taxis, airports, shops, etc) knew everything about the event and were very excited about it coming to Charlotte. Now we are all working on bringing the maximum number of people to the event, then we will have to wait for the event, but we are very optimistic. When you see the venue and the track this event is going to be something very special.

Mxlarge: I heard that the dirt in Charlotte will be a clay base. Will Youthstream build the circuit or is that the job of Charlotte Motor Speedway? And will the race be at night?

Luongo: Like everything the track is done in partnership. Youthstream will design the track, and the building of the track will be done by SMI in cooperation with the Youthstream World Championship track designer. Yes, the races will be held on Saturday night, the show will be great and there will be many surprises.

Mxlarge: The calendar for 2016 is just mind blowing, so many exciting races and countries. It seems like we have probably half the rounds this year at facilities that could be massive. Places like Charlotte, Assen, Losail, Matterley Basin, St Jean, Mantova, Valkenswaard, Lommel, Glen Helen, returning to Switzerland, overseas races in Thailand, Qatar, Argentina, USA, Mexico. It doesn’t seem like there is a lot of room for improvement in such a calendar, but knowing Youthstream there will be more surprises in 2017. Do you have any new on places likes Australia, Malaysia or maybe another round in the middle east?

Luongo: Yes the 2016 calendar is very nice, but there is always room for improvement. I won’t see the calendar as perfect until we have rounds in Japan, China and Russia, and the day we have these countries we will be very satisfied, but then as there will be 18 MXGP events per year some venues which are not at 100% will lose their place, however there will be sure the place for all the best venues. For the future we are in negotiation with Australia, Malaysia and Indonesia, and interest in Europe is also growing so for 2017 we will normally see the return of Sweden and, after a very long break, San Marino.

Mxlarge: What do you most look forward to in 2016?

Luongo: The 2016 season could possibly be the most interesting season, even more so than 2015. At the beginning of 2015 everyone was looking only at 2 riders, Cairoli and Villopoto, in the 2016 MXGP class there are at least 8 candidates for the title; there is the return of Ben Townley under the management of Stefan Everts, there is Desalle on his new bike brand, Cairoli will has been starved of a victory and will be hungry for revenge after his first loss in a long time, there is the reigning Champion, Fevbre, who wants to confirm his success, then it could be the right moment for Paulin, Nagl, Van Horebeek, Bobryshev or Strijbos, and it will be also very interesting to see how the rookies get on. It’s going to be a crazy and unforgettable year.

Mxlarge: How is development for the Riders and Manufacturers Cup. Do you already know what type of riders will be coming? Just GP, or also some Americans? I understand all the factory teams in GP have promised to come?

Luongo: Everything is going very well, the venue and area is fantastic for this event. We have received confirmation from all our sponsors and TV Broadcasters to fully support us with this event, and the manufacturers have also confirmed their participation; today KTM Factory, Husqvarna Factory, Yamaha Factory, Suzuki Factory, Kawasaki Factory and TM Factory have confirmed, Honda needed a little more time but should be confirmed very shortly. It’s not up to Youthstream to choose the riders; the factories will select their best 3 riders to represent their brand for this event, we know the manufacturers are planning to have the top riders they have on their team (MXGP and American).

The system will be easy, and it leaves the factories the free choice; every manufacturer can enter 3 riders with the bike capacity of their choice (250cc – 450cc), plus they can have 1 reserve rider in case of injury (the reserve rider can enter at any moment).

There will not only be Supermotocross racing, but also music and dancing. It’s going to be a wild night of motorsport passion and fun. We are working on having a star DJ with music during the breaks and then to finish off the night everyone can ‘dance on the dirt’, it’s going to be something not to miss!