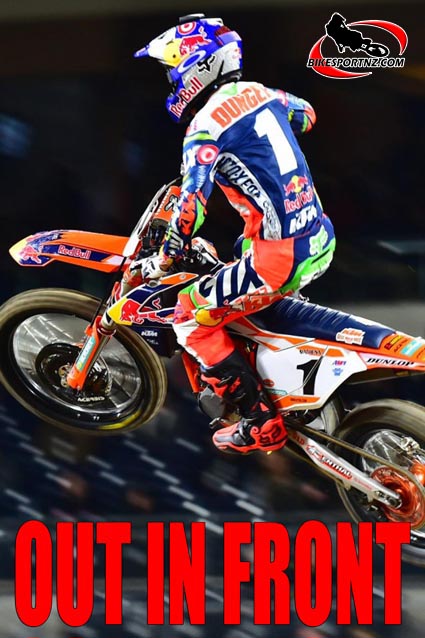 Defending champion Ryan Dungey has once again walked away from the opposition to win the third round of the AMA Supercross championship at Angel Stadium, Anaheim, at the weekend and enhance his points lead in the AMA Supercross series.

KTM’s Dungey who has won eight of 12 starts, picked up his fourth win in Anaheim and continues to move towards another AMA championship.

Davi Millsaps took the lead early from Dungey and Reed. The field spread out quickly with Weston Peick in fourth and Jake Wiemer in fifth. Once again Roczen and Tomac are struggling in 8th and 9th.

Canard crashed on the finish line jumps and injured himself, heading back to the pits, while Marvin Musquin was 18th and his fellow Frenchman Christophe Pourcel in 17th.

Dungey goes up the inside of Millsaps and takes the lead, but loses it straight away. Once again Dungey takes the lead and keeps it this time. Reed is right behind the other two now.

13 years after winning his first ever main event in the big bike class Reed shows what a talent he is as he passed Millsaps for second and looks to move closer to Dungey.

Dungey moved well away from Reed and clocks a quicker lap time than the Aussie. Dungey looked safe up front.

Tomac was flying as he moves past Millsaps, clocking a 57.4 for the quickest lap of the race in the early going. Roczen was up to fifth and closing in on Milsapps.

Dungey held a four second lead over Reed after eight laps. Roczen moved into fourth on lap 10 as Anderson also looks to pass Millsaps. Tomac had moved up on Reed and it looked like the Aussie might be in trouble soon.

Reed who has won a race in 11 different seasons was feeling pressure from Tomac, although the Yamaha rider pushed some nice laps times and moves away a little.

Dungey was proving once again he is the best rider in America, as he controlled this race easily. Roczen moved up on Tomac as the two series favorites go head to head.

Both closed up on Reed as these three fought for second place. This battle was amazing as Reed tries to fight of Tomac and Roczen.

Tomac went down as he lost the front wheel, and lost one spot, while Roczen was right on Reed. Up front Dungey is the man. Dungey wins it, from Reed and Roczen.

Ryan Dungey: Just preparation, good starts is key, good lines and attacking those lines. I was behind Milsapps a knew I had to pass him, Reed was behind me and I know he wanted that ninth win here to break the record. Everyone behind me has really helped out and I am praying for Leo, he is in hospital with cancer and he is the real winner, we are just racing on the track.

Chad Reed: Last week I was happy and I keep telling myself I should be happy with second, but I am not here for second and this track should have suited me, but I struggled and to have that and get a second I am really happy. I want to battle, I wanted my ninth win here at Anaheim. We will do our homework and keep going. There is a reason Ryan and I are the only two times champs, it takes 17 rounds.

Ken Roczen: It was tough, the start didn’t happen again and I am pissed off about that. I made a mistake late and felt I could have gotten Chad. We will come back start and we will work on the starts and make it happen.

Cooper Webb: We have problems with suspension in the heats and I went from being the slowest guy in the whoops in my heats to the quickest guy in the main. My guys told me they would change some things and I trusted them, they haven’t let me down yet. Sorry my parents couldn’t be here, Carolina airport got snowed under and they couldn’t make it, but I know they are watching on television.

Zach Osborne: I struggled in the heat race, but I felt funky, I have to give it up to my team, they picked it up for me. I felt good about my ride, but I didn’t push hard enough when they were battling, but Cooper is riding so well it’s going to take a good ride to beat him. I didn’t ride the whoops well in the heats, but did ok in the main. We go back to work this week and see what we can do. I have been riding with Davy Milsapps and that has been helping me.

Christian Craig: I didn’t get the holeshot and felt ok, but then I got tight and it was nice battling number one. I am doing this for my son, when he was born I looked at him and told myself I need to show my son I didn’t give up on my dream.