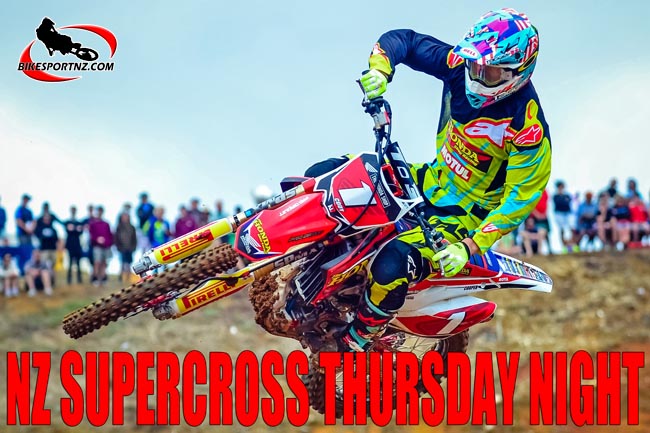 New Zealand’s supercross elite will again converge in the deep south of the country for the “world’s southernmost supercross” this Thursday evening.

The Southland Motorcycle Club will once again hold the Brent Scammell Honda New Zealand Supercross Championships at the popular Cooper-Vetsouth Supercross Track at Ryan Road, Winton, on Thursday, the event on the second day of the massively-popular Burt Munro Challenge week.

Cooper last won the open class supercross title in 2013 when injuries forced him to sit out the championships last season.

The 38-year-old Coppins has not raced the supercross nationals in recent years but he last won the open class supercross title in 2011 and he showed he was still on the pace with the nation’s motocross elite when he won the MX1 class at October’s big MX Fest event at Taupo.

Australian riders also arrive in force for the supercross this year with Brisbane men Nick Sullivan (Honda CRF450) and Sam Duncanson (Honda CRF450), along with 250cc class rider Geran Stapleton (Honda CRF250), who is taking a break from his Australian supercross championship campaign to cross the Tasman and compete at Winton.

Stapleton is currently running fifth overall after four of six rounds in the Australian series.

It is certain that a fresh name will be engraved on the trophies this week – Australian riders Sam Martin and Jay Wilson won the open class and 250cc titles respectively last season but neither rider is entered this time around.

Gates open at the Vetsouth Supercross Track at 5pm, giving spectators ample time to get there from the New Zealand Hill-climb Championships, being held at Bluff earlier in the day.