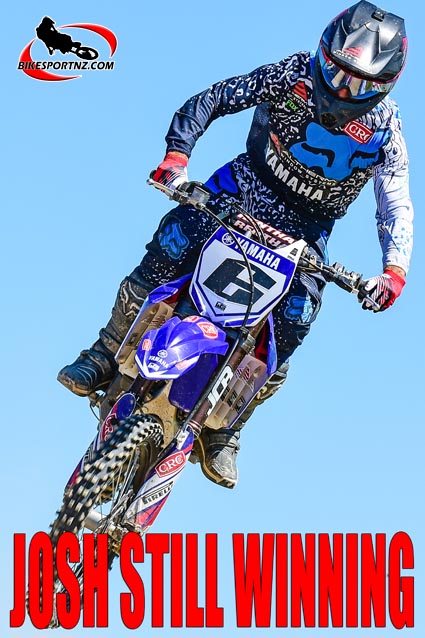 It’s one down and three to go for Motueka’s Josh Coppins as he heads into his busiest time of the year.

The 38-year-old former motocross Grand Prix star, now more accustomed to working behind the scenes as the boss of the Altherm JCR Yamaha Racing Team than he is to the actual task of racing bikes, showed again at the weekend that he can lead by example too.

Fresh from his MX1 class and feature race victory at the big annual MX Fest at Taupo, the South Island hero continued his win streak with more impressive performances, this time winning the MX1 class at the weekend’s Otago Motocross Championships at Mosgiel, as well as winning the all-capacities feature race.

But he will have no time to rest on his laurels with a packed programme of events to occupy him over the coming days.

“Racing the Otago Motocross Championships was really just a warm-up for me ahead of the Burt Munro Challenge week,” said Coppins, who will race the same Yamaha YZ450F bike, although with slightly different settings and component parts, in the “world’s southernmost supercross” – the New Zealand Supercross Championships at Winton – tomorrow evening, followed by the beach races at Oreti Beach, Otatara, near Invercargill, on Friday and then the Invercargill street races on Sunday.

There’s no time for relaxing between those events, either, as Coppins conducts training sessions with Yamaha riders Courtney Duncan, from Otago, and 2014 national 7-8 years’ 65cc mini motocross champion Mitch Weir, from Invercargill.

He then heads back to his base at Motueka to conduct further training, this time with Mangakino’s former national MX2 champion and 2015 New Zealand Motocross of Nations team rider Kayne Lamont.

“The van is pretty full of parts at the moment, because I need to switch over the bike from motocross mode to beach race settings and then to super motard settings for the street races. I guess it shows what a versatile bike the YZ4560F is.”

Of course, it also shows what a versatile racer Josh Coppins is.

“I’m doing quite a bit of riding at the moment, just to fill in, because my official MX1 bike rider (Australian Dean Ferris) is not due in the country just yet.”

Coppins and Lamont will ride for the Altherm JCR Yamaha Racing Team at the Auckland Motocross Championships, near Pukekohe, in just over a week’s time, on December 6.