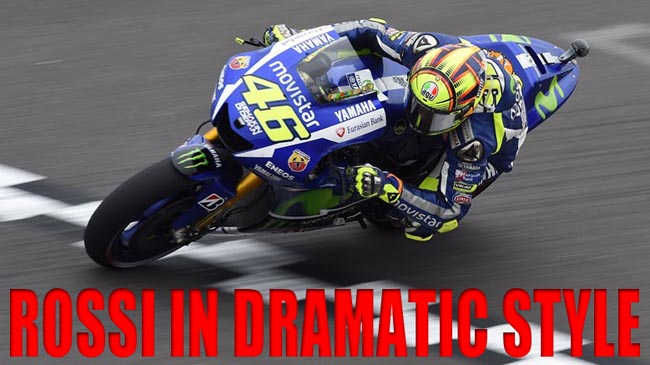 Italy’s Valentino Rossi has taken a sensational victory after a masterful ride at the MotoGP of Argentina, the Gran Premio Red Bull de la República Argentina.

The sun had come out and track temperatures had risen to 37 degrees for the start of the MotoGP race at the Termas de Rio Hondo. The reigning MotoGP World Champion Marc Marquez, along with CWM LCR Honda’s Cal Crutchlow, decided to switch to the hard rear tyre on the grid, unlike Rossi and Lorenzo who both decided to use the extra hard compound rear.

Aleix Espargaro led into the first corner, but Marquez passed the Team Suzuki Ecstar GSX-RR almost immediately and used his hard tyre to create a four-second gap at the front.

At about mid-race distance Marquez’s tyres appeared to start to lose performance meaning that the chasing pack, led at this point by veteran and nine-time former champion Rossi, started to close in on the leader. “The Doctor” had worked his way through the pack from 8th on the grid and could sense victory, as he was lapping almost a second quicker than Marquez.

The nine-time World Champion eventually caught Marquez with just two laps to go with the two riders touching, before Marquez clipped the back of Rossi’s bike and crashed out of the race. Rossi went on to take the race win by over 5 seconds ahead of Andrea Dovizioso in second, with Cal Crutchlow stealing the final podium spot from Andrea Iannone on the very last corner.

Rossi’s Yamaha team-mate Jorge Lorenzo finished in 5th ahead of Bradley Smith on the Satellite Monster Yamaha Tech 3 bike. Aleix Espargaro ended the race in 7th, ahead of his brother Pol Espargaro, with Scott Redding and Maverick Viñales completing the top 10.

CWN LCR Honda’s Jack Miller took the Open class victory as he finished in 12th, just 0.075s ahead of Hector Barbera on the Avintia Ducati.

Rossi now has a six-point lead over Dovizioso in the MotoGP World Championship standings, and is 30 points ahead of Marquez.

Results from the MotoGP of Argentina, round 3 of 18:

Standings after round 3 of 18: