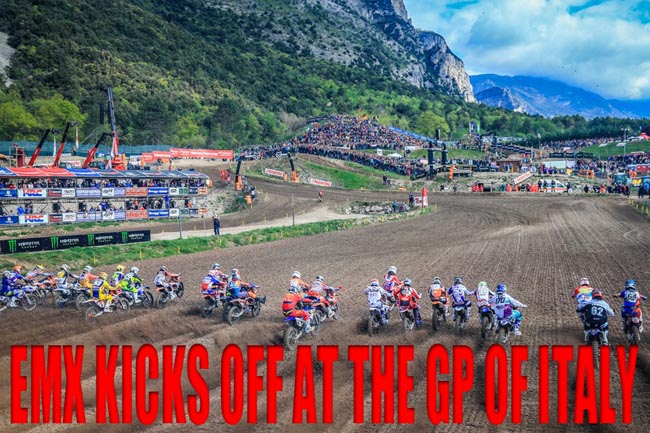 The first rounds of the 2015 European Championship EMX250 and EMX125 took place at the weekend with Kiwi hero Josiah Natzke making a solid impression.

Shadowed by the stunning Dolomite Mountains and in close vicinity to Lake Garda, the clay based traditional styled circuit in Pietramurata always attracts thousands of hysterical fans from all areas of the world, which provided an amazing atmosphere for the young riders who by racing the EMX championships are dipping their toes in the world of professional motocross.

And it was two young French riders in the form of Bud Racing Monster Energy Kawasaki’s Maxime Desprey and Kemea Yamaha Yamalube’s Maxime Renaux who stood top of the podiums respectively in the EMX250 and EMX125 categories respectively.

The young guns of the EMX125 had the luxury of being the first race of the day. This meant they had a well-watered track, which on top of clay and rock was going to make things a little more interesting with traction being hard to find.

When the gates dropped, despite the unpredictability of the circuit it was Finland’s Miro Sihvonen and Renaux who got off to great starts and controlled the race from start to finish to take home the first and second place respectively.

While Sihvonen’s race win was impressive considering he was only 11th in race one on Saturday, as was the performance of KTM Factory Junior Team’s young New Zealander Natzke, who had the slick and technical circuit dialled in, passing his team-mate, the holeshot winner Jorge Prado Garcia, early on in the race to claim a solid third.

Meanwhile, Prado had a few sketchy moments but managed to save them for fourth while Marchetti Racing Team’s Kim Savaste came home in a solid fifth.

With the combination of results from both races, Renaux took the first EMX125 round victory of the year with his pair of second place finishes. Meanwhile the race one run away story of Danish rider Glen Meier resulted in second overall with Garcia rounding out the top three.