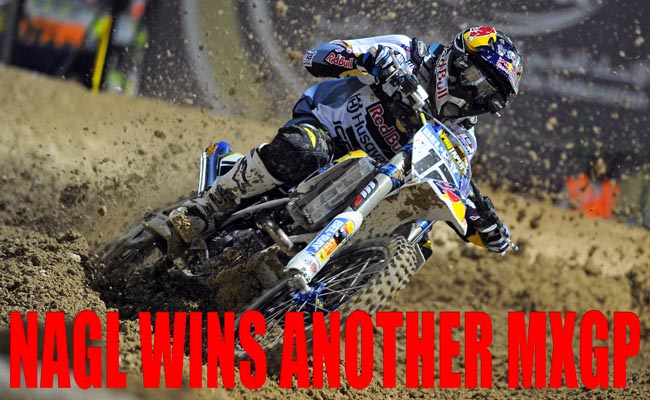 Germany’s Max Nagl has won his third GP out of four with victory at the Motocross Grand Prix of Trentino in Italy at the weekend, the fourth round of 18 in the world series.

Just one point now separates the top three in the MXGP points with Desalle on 171, Cairoli 170, and Nagl 170.

It will go down as one of the greatest Grand Prix races in the history of the sport and Cairoli stood firm as he controlled the opening race of the MXGP class, just as he so often does.

The MXGP opening moto was a little wild early as Cairoli led from Nagl and Villopoto. The American came very close to going down as he pushed his way into third place, running off the circuit, and looking terribly out of shape.

Amazingly all the big guns were at the front and after a lap it was Cairoli, Nagl, Villopoto, Desalle, Febvre, Paulin, Frossard, Coldenhoff, Van Horebeek and Bobryshev in 10th spot.

Not a lot happened in the early going of this race as making up ground on the rider ahead was nearly impossible. Nagl was trying many different lines to make up the one second Cairoli had on him, but nothing was working and in fact he lost a little ground.

After five laps Cairoli had nearly two seconds on Nagl, with Villopoto back in third some four seconds off the pace of the leader. Desalle was Febvre were close to the American and on lap six, although Villopoto turned it up a little and started making ground on the two front guys.

After nine laps and Nagl had edged closer to Cairoli, with Villopoto three seconds back, and Desalle a further second behind the American. Febvre was fifth, Paulin came next followed by Van Horebeek, Bobryshev, Frossard and Coldenhoff in 10th.

The top four started getting a little closer and Villopoto was working overtime in third place, but the even that half a second to Nagl seemed nearly impossible to close.

Lap 12 and Nagl is onto Cairoli with Villopoto also close. The Italian crowd are going nuts as the top three fight for the moto win. Desalle is lurking in the fourth place.

Somebody has to make a mistake soon, the level of intensity is so high at the moment. Lapped riders are now becoming a problem for the front three.

Amazing action as Nagl nearly passes Cairoli, although Cairoli changes lines and stops the German in his tracks. Nagl tries again but again Cairoli is too smart. Desalle passes Villopoto and a legendary Grand Prix moto is being played out in front of this massive Italian crowd.

The craftsman Cairoli is riding just as he always does, not taking any risk, but controlling his competition, brilliant to watch.

Nagl continues to hound Cairoli, as they put some ground between themselves and Desalle. Nagl is all over the back wheel of the Italian, the pressure is immense, but Cairoli stays calm.

Nagl tries an inside pass, but doesn’t make it, then nearly runs into the back of Cairoli. In the shadows and two seconds back is Desalle, with Villopoto now four seconds back.

Cairoli wins from Nagl, Desalle and Villopoto in one of the most exciting races of this decade.

The second MXGP moto and it’s Nagl who blasts out of the start and takes the holeshot from Cairoli and Villopoto. The top ten after one lap are Nagl, Cairoli, Villopoto, Desalle, Coldenhoff, Waters, Febvre, Paulin, Searle and Philippaerts.

Nagl breaks away from Cairoli and holds a three second lead after one lap and more than five seconds after the second lap. The German is once again on fire.

Cairoli and Villopoto are in an intense battle for second place, the fight the whole motocross world are waiting for looks likely to explode, although Cairoli quickly turns it up a notch and pulls away from the American racer.

Desalle just as he is doing all season long is hovering around, waiting and watching. Nagl though is on fire as he pulls to a nine second lead after just five laps. Febvre has passed Waters for sixth spot.

Six laps and the lead is now more than 10 seconds and this GP looks like it might end up being Nagls again. Villopoto is back on the rear wheel of Cairoli as he tries to capture a podium place.

Now it’s Villopoto and Desalle swapping places and Desalle tries to make a pass. Then unbelievable Villopoto makes a huge mistake and goes down hard. It seems while he tried to stop Desalle passing got a handful of throttle and the bike lifted as he wheelied down the straight, eventually crashing to the ground. It looked like the American had hurt his knee.

Soon after Desalle also slid off. Up front Nagl continued to dominate with a 17 second lead as the race closed down. The top five was Nagl, Cairoli, Febvre, Desalle, Paulin.

In the MX2 class, it was an emotionally charged victory for Honda Gariboldi’s Tim Gajser who in race two passed the defending champion Monster Energy Kawasaki Racing Team’s Jordi Tixier and resisted a brief challenge from “The Bullet”, Red Bull KTM Factory Racing’s Jeffrey Herlings, for his first MX2 race win of the season and his first ever MX2 Grand Prix overall.

Results from the fourth round of 18 in Italy: