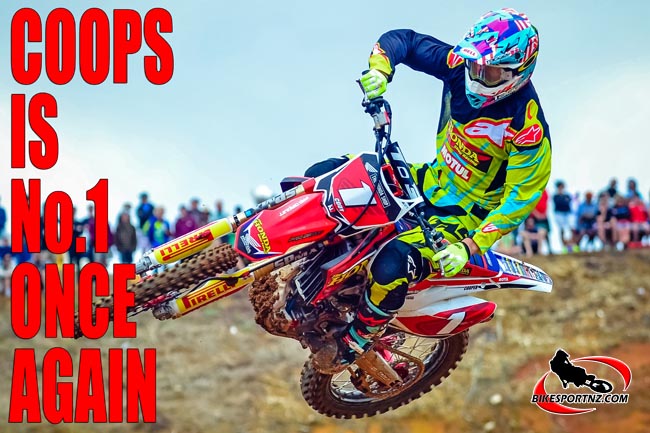 Bay of Plenty’s Cody Cooper is national champion once again.

The multi-time winner made it three MX1 class title wins in a row when successfully defending his crown at the fourth and final round of the 2015 New Zealand Motocross Championships near Pukekohe on Sunday.

Mount Maunganui’s Cooper (The Honda Shop Racing Team CRF450) arrived at the steep and demanding circuit at Harrisville with one hand already on the trophy, 19 points clear of his nearest rival, Australian vice-champion Kirk Gibbs (KTM Australia), with his own Honda team-mate John Phillips, of Rotorua, was just seven points further back in third position.

A sensible and perhaps conservative approach would be enough for Cooper to get the job done and, when he won the first eight-lap race of the day, he’d pushed his advantage out to 30 points over Gibbs – who managed only seventh in that race – and so the title was his if he could manage fifth or better in the next two races, assuming the worst was to happen and Gibbs won them both.

Gibbs did win both of the next two races, but Cooper backed off and cruised to two runner-up finishes and this was easily enough for him to win the day overall and to clinch the JT Racing-sponsored championship as well.

“I’ve learned a few things over the years and one of those thing is not to panic or push too hard when you don’t need to. I let Kirk pass me in both the last two races today and then just tucked in behind him. I knew I didn’t have to do anything silly to beat him for the title,” smiled the 31-year-old Cooper.

“I was actually already thinking about the next championship next year. I didn’t want to get injured. Plus, I’m off to race for the Penrite Honda Team at the Australian Motocross Championships (starting at Horsham, in Victoria, on March 29) and I didn’t want an injury heading into that either.

“I was quite relaxed today. I knew I didn’t have to do much to win the title. I’d really set myself up with the results from the earlier rounds and by getting three holeshots from three starts today, I just did what I had to do to get the job done,” said Cooper.

Phillips finished 6-3-8 in his three MX1 outings and had to settle for third place overall in the championship. 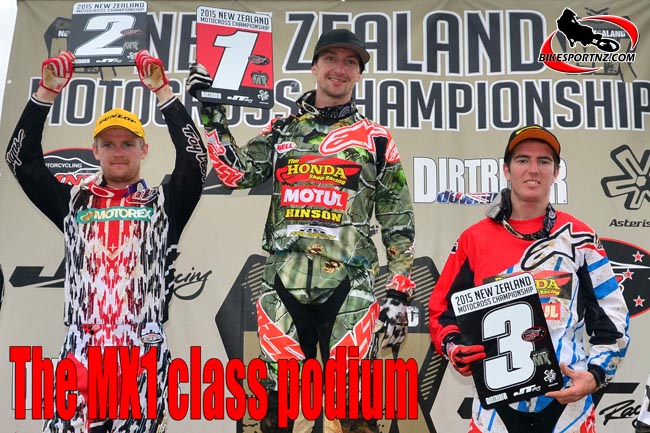